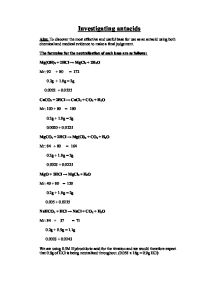 The known medical side affects of the chemicals available for testing include: Magnesium hydroxide (Mg(OH)2), milk of magnesia is relatively insoluble and is therefore an antacid of greater gastric longevity and usefulness. It is fast reacting and only a small amount of ionic magnesium is absorbed into the blood stream. Magnesium salts remain in the intestines and can have a laxative effect. Magnesium and aluminium containing antacids often combined in commercial products to offset their individual effects on bowel function. Calcium carbonate (CaCO3) is a very effective antacid and reacts more slowly than Sodium bicarbonate. Some of the ionic calcium is absorbed and may infrequently cause hypercalcemia (high calcium in the blood) which can cause kidney failure. It is also used as an antidote to corrosive acid poisoning. Sodium bicarbonate (NaHCO3) is very soluble, fast reacting and the active ingredient in baking soda. Because it is readily soluble, it is rapidly removed from the gut by absorption. Therefore, sodium bicarbonate not useful for long term use as it can cause fluid retention. Magnesium oxide (MgO) and Magnesium carbonate (MgCO3) can have a laxative effect, which can interfere with absorption of vitamins from your diet. Results: Base tested Amount of HCl neutralised (ml) Test 1 Test 2 Average Mg(OH)2 10.9 10.8 10.9 CaCO3 9.0 10.2 9.6 MgCO3 10.1 9.7 9.9 MgO 12.7 11.5 12.1 NaHCO3 6.9 5.3 6.1 Conclusion: The magnesium based antacids neutralised the most acid on average because they had the highest formula mass compared to the amount of HCl being neutralised. ...read more.

If I were to carry out this experiment again for a medical firm, I would ensure the use of more accurate equipment in order to obtain more reliable results with a smaller percentage error. In addition, the indicator during the titration would often continually revert to 'orange' as more and more of the acid was neutralised, meaning that we had to eventually decide to terminate the experiment after a certain length of time, and that not all of the neutralisation was complete. If I were to carry out this experiment 'for real', I would probably use a calibrated digital pH meter to allow me to precisely ascertain the point at which the neutralisation was complete, eliminating any inaccuracies due to the indicator. I could also extend the enquiry by cross-checking my original results with those of a back titration whereby they are dissolved in acid of an exact known concentration and then calculating the amount of acid each base neutralised. One would expect these results to match, confirming the data taken and allowing a more complete judgement to be made. In conclusion, I believe that the experiment was completely adequate given the resources available and that we were preparing an initial study for further investigation by a specialist team (ie. there would be extensive further testing before any product was used in human trials). It was clearly possible to distinguish between the bases and I was able to confirm my prediction. Further study would only be necessary for a 'real' test. ...read more.