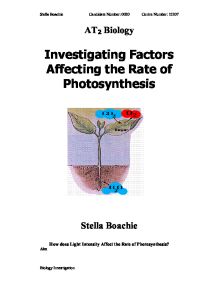 AT2 Biology Investigating Factors Affecting the Rate of Photosynthesis Stella Boachie How does Light Intensity Affect the Rate of Photosynthesis? Aim The aim of this coursework is to investigate whether light intensity affects the rate of photosynthesis. To do this, I will place a piece of Canadian pondweed in varying light intensities and observe the amount of oxygen given off. Introduction Photosynthesis is the process by which green plants and certain other organisms transform light into chemical energy. In green plants, light energy is captured by chlorophyll in the chloroplasts found in the palisade cells of the leaves and used to concert water, carbon dioxide and minerals into oxygen and energy rich organic compounds (sugar) that are the basis of both plants and animal life. The first step in photosynthesis is Light Dependent Processes (Light Reaction). Light strikes chlorophyll in such a way as to excite electrons to a higher energy state. In a series of reaction, the energy is converted along an electron transport process into ATP (adenosine triphosphate) and NADPH (nicotinamide adenine dinucleotide phosphate). Water is split in the process, releasing oxygen as a by-product of the reaction. The ATP and NADPH are used to make C-C bonds in the next stage of photosynthesis, Light Independent Process (Dark Reaction). In the Light Independent Process, carbon dioxide from the atmosphere is captured and modified by the addition of Hydrogen to form carbohydrates. The incorporation of carbon dioxide into organic compounds is known as carbon fixation. Photosynthesis can be summarised as: Carbon dioxide + water Glucose + Oxygen Prediction I predict that as the distance of the light from the plant decreases (more light intensity), the rate of photosynthesis will increase up to a certain point. This is because the plant will reach a level where an increase in light intensity will have no further effect on the rate of photosynthesis, as there will be another limiting factor, in this case probably carbon dioxide or temperature. ...read more.

This would affect the results because I might have just counted one or two bubbles just after the one minute. This will affect the accuracy of my results. Overall, I felt that due to the small volumes of oxygen involved, my experiment was not as accurate as it could have been, however I believe it was accurate enough to support and justify my hypothesis and prediction. Improvements could have been made as I have stated, mainly by simply taking the reading for my investigation, maybe every 30 seconds. However, due to practical time constraints in taking the reading for my investigation to time extension, I could not in fact make these adjustments. The other obvious way of increasing the reliability of my results would be to repeat the experiment more than twice and find an overall average result. To extend my enquiries into the rate of photosynthesis, I could perhaps investigate another variable of photosynthesis. As this investigation was fascinating, I would consider a colour experiment where I would investigate how wavelength of light affects the rate of photosynthesis. This is how the experiment would be set up: I would use basically similar apparatus used in this investigation, but however, a white light would be used because a white light contains all the different light wavelengths. Between the light and the pondweed, I would place a colour filter (colorimeter) which will be connected to a computer. The computer will read the amount of each light wavelength absorbed by the plant. In the investigation, I would expect the photosynthetic rates of the pondweed would generally follow the absorption spectra of the three primary photosynthetic pigment classes (chlorophylls a and b and carotenoids), with peak rates of photosynthesis occurring under light at the optimum ranges of those spectra. I believed this because these photosynthetic pigments would absorb the light energy and use it to drive the light reactions of photosynthesis, which would in turn produce molecules to drive the Calvin cycle of carbon fixation--and growth. Stella Boachie Candidate Number: 0020 Centre Number: 12107 Biology Investigation ...read more.

*****
A clearly written account of the investigation. Well thought through conclusions and analyses. A little more detail in the method would have been helpful.