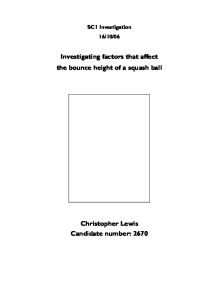 Investigating factors that affect the bounce height of a squash ball

m 0.2 m 0.4 m 0.6 m 0.8 m 1.0 m 1.2 m 1.4 m I believe that these will give me a good range of results for several reasons. Firstly, I felt that this range would be appropriate because it would be relatively easy to control the experiment. If I dropped the ball from a greater height (for example, 2 m), I would not be able to bend down quick enough (even with the aid of the release mechanism) to get a reasonable idea of how high the bounce was. It would also present a much greater health and safety risk, as I would have to stack objects underneath the clamp stand in order to get it high enough. I decided to spread my heights in intervals of 0.2 m, because I felt that it would give me a good spread of data. I used 0.2 m intervals because I thought that if the spacing was any less, it might be difficult to accurately measure see the difference between the bounce heights. This would mean that any slight inaccuracies in the measuring process (which I have already identified as a potential problem) would be less significant. e) Reliability of evidence: To get reliable results from this experiment, there are a number of things which must be addressed. The most important of these is controlling all other variables which may affect the investigation. Therefore, it is of utmost importance that I hold a fair test, which can be achieved by doing the following: * Dropping the ball on the same surface each time. * Measuring the bounce height from the same place (the bottom of the ball) in each case. * Measuring bounce height to a common degree of accuracy (measured in metres to 2 decimal places). * Not holding onto the ball for too long in order to try and keep the ball temperature constant. ...read more.

This would affect the results. To prevent this from happening, I made sure that the surface was reasonably flat. * The ball was affected by another force. If the ball had been affected by another force, such as a movement of air (for example, a draught), it could have altered the way it fell and bounced. To avoid this, I made sure that the windows were closed while doing this experiment. 4) Suitability of the Method I feel that the method I used was entirelysuitable, and I can find no problems with its design. 5) Reliability of the Evidence From my analysis, I feel fairly certain that my prediction has been proven to be correct, and my conclusion is true. I think that I repeated the experiment enough times to show this. In order to obtain reliable values, however, I believe that it would be necessary to repeat this experiment whilst measuring the bounce height correctly (e.g. with a video camera) in order to obtain precise measurements. 6) Improvements to the Method In order to improve my method, I could use a video recorder in order to measure the bounce accurately. I could also have used a perfectly flat, smooth surface to bounce the ball on, ensuring that any (however small) irregularities in the worktop surface which I used would not affect the results. 7) Extension Work In order to investigate squash ball bounce heights further, there are a number of things I could do. Firstly, I could extend the range of heights that I investigated - maybe up to 2 m - to try to ascertain how high the drop had to be before terminal velocity was reached. I could also decrease the intervals between each release height - maybe from 0.2 m to 0.1 m - to get a clearer idea of the pattern, and to prove that it is in fact linear. Furthermore, I might examine the effect of other variables, such as temperature, on the bounce height of the squash ball. ?? ?? ?? ?? 2 ...read more.

The writer has gone into great detail in order to answer the question, and as a result produced a brilliant and well written report. It was good for the writer to explain the theory behind the concept being explored, which ...

The writer has gone into great detail in order to answer the question, and as a result produced a brilliant and well written report. It was good for the writer to explain the theory behind the concept being explored, which then followed by the preliminary investigation. The preliminary investigation was well thought out, as it was able to explore the pros and cons that could have occurred with the main investigation. It is clear that the writer put in a lot of thought throughout the report, as they were able to discuss the variables that could have potentially effected the results.

In terms of the main investigation, what was good is the writer was able to explain as to why certain results had occurred with their data. Data was well presented and labelled clearly. This was then presented well within a graph, which also included a line of best fit. If the writer wanted to go even further, they could have explored the idea of error and therefore presented this error on their graph in the form of error bars. The writer's explanation of results and conclusion was written well. The evaluation was good, as the writer was able to explain the realistic effects that could have potentially caused less accurate results. Overall though, this is a excellent report.

The level of language that the writer used is of a very high standard. In addition to all the standard physics terms the writer is discussing, they are also able to use experimental language correctly. They were able to differentiate between all variables involved. The writer explained precision and accuracy correctly. It was also good that the writer looked at the idea of extension work.

Spelling, grammar and use of terminology was of a good standard. Each section was labelled clearly and therefore easy to follow.