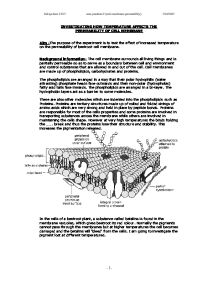 INVESTIGATING HOW TEMPERATURE AFFECTS THE

INVESTIGATING HOW TEMPERATURE AFFECTS THE PERMEABILITY OF CELL MEMBRANE Aim -The purpose of the experiment is to test the effect of increased temperature on the permeability of beetroot cell membrane. Background information- The cell membrane surrounds all living things and is partially permeable so as to serve as a boundary between cell and environment and control substances that are allowed in and out of the cell. Cell membranes are made up of phospholipids, carbohydrates and proteins. The phospholipids are arranged in a way that their polar hydrophilic (water attracting) phosphate heads face outwards and their non-polar (hydrophobic) fatty acid tails face inwards. The phospholipids are arranged in a bi-layer. The hydrophobic layers act as a barrier to some molecules. There are also other molecules which are indented into the phospholipids such as Proteins. Proteins are tertiary structures made up of coiled and folded strings of amino acids which are very strong and held in place by peptide bonds. Proteins are responsible for most of the cells properties and some proteins are involved in transporting substances across the membrane while others are involved in maintaining the cells shape. However at very high temperatures the binds holding the ....... break and thus the proteins lose their structure and stability. This increases the pigmentation released. In the cells of a beetroot plant, a substance called betalins is found in the membrane vacuoles, which gives beetroot its red colour. Normally the pigments cannot pass through the membranes but at higher temperatures the cell becomes damaged and the betalins will 'bleed' from the cells. I am going to investigate the pigment lost at different temperatures. Hypothesis- an increase in temperature will lead to more damage to the cell membranes, which will increase their permeability, and therefore allow more of the pigment to be released. Expected result- the following temperatures will be used to measure the absorbency, 0C, 10C, 20C, 30C, 40C, 50C, 60C, 70C. ...read more.

I will try to move the test tubes as least as possible in between the experiments so I do not speed up any reaction involuntary. Furthermore I will work on a flat surface, so as to make sure there is the right amount of volume and when transferring the water from the pipette to the test tube, I will try not to spill any. I will use the same beetroot for the whole experiment as using a different beetroot may affect the results. This is because a particular beetroot may contain more betalins which could result in a faster rate at which the dye is released. This would not make the experiment a fair test. ame sized cork borer (number 4) to ensure that all the beetroot pieces are the same width in diameter. A larger surface area will cause faster diffusion as more of the membrane will be exposed. (Ficks law) volume of water in each experiment must be consistent as more or less water could affect the rate of movement across the cell membrane. time the beetroot are left in the water. If they were all kept to different times then the results would not be reliable enough to draw up a conclusion and say if the results agree with the hypothesis. The independent variable will be the temperature of the water the beetroot pieces will be placed in. These temperatures will vary from 7�C to 73c. I will make sure before using the boiling tubes that they are clean and if not they are properly cleaned and dried so as not to contaminate the water with anything that is left behind in the tubes. This is because if the water got dirty this could possibly affect the results. I will make sure than once the beetroots are in the boiling tubes I do not keep taking them out again or that I do not shake the tubes but leave them in the racks. ...read more.

However I feel that my results show fairly well how a membrane functions under temperature change. The other difficultly was getting the right temperature. Because no water baths were available I used a kettle to heat the water. Water baths would have been much more reliable and sensible to use as the bath could heat each water to the required temperature as they are thermostatically controlled. The problem with using the kettle was that it can only heat water till boiling point and so that meant I had to add tap water or ice to get the required temperature. Also the kettle can contain many impurities which I was not aware of. When conducting this experiment next time I will make sure that if water baths are not available I will use a Bunsen burner to heat the water as this way I can get the required temperatures more easily. I realise that a systematic error in the procedure was that I used the same thermometer for each temperature. This could have transferred some particles. If available, water baths would be a better option to use. I could have used Electronic balances I would also use a smaller range of temperatures, starting with 10 to about 50, Dropping pipettes Pasteur pipettes (also called dropping pipettes) are designed to give a constant volume in each drop, although they are not very accurate. They should be held upright (rubber bulb at the top) during use. To get a drop to form, squeeze very gently on the rubberbulb. If you are too enthusiastic several drops will come out. Be very careful using Pasteur pipettes with hazadous solutions. If you take the end of the pipette out of the solution before you release the bulb you will find that a little bit of air gets drawn intothe end of the pipette. That will help stop the liquid in the pipette leaking out. Do notlay Pasteur pipettes down flat nor tip them upside down, as this lets the solutions runinto the bulb. This can lead to the solution getting contaminated, and to the rubber in the bulb perishing. ...read more.