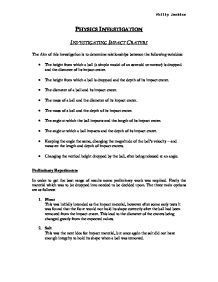 The Aim of this investigation is to determine relationships between the following variables:

In order to get the best range of results some preliminary work was required. Firstly the material which was to be dropped into needed to be decided upon. The three main options are as follows:

This was initially intended as the impact material, however after some early tests it was found that the flour would not hold its shape correctly after the ball had been removed from the impact crater. This lead to the diameter of the craters being changed greatly from the expected values.

The ball was dropped from an ample height of 35cm with 4 different masses. Each mass was dropped 5 times and an average taken for the crater diameter and depth (to the nearest millimetre).

This graph is very pleasing, as both the crater diameter and depth appear to have good linear relationships with the mass of the ball.

This will be due to the ball having more kinetic energy (mass multiplied by velocity squared) – so more energy will be put into displacing the sand grains downward and outward.

Experiment Three – How does crater diameter vary with the ball’s diameter?

Balls of similar mass and varying diameters were chosen for this experiment. Again the drop height was kept constant at 35cm and the balls were dropped 3 times. 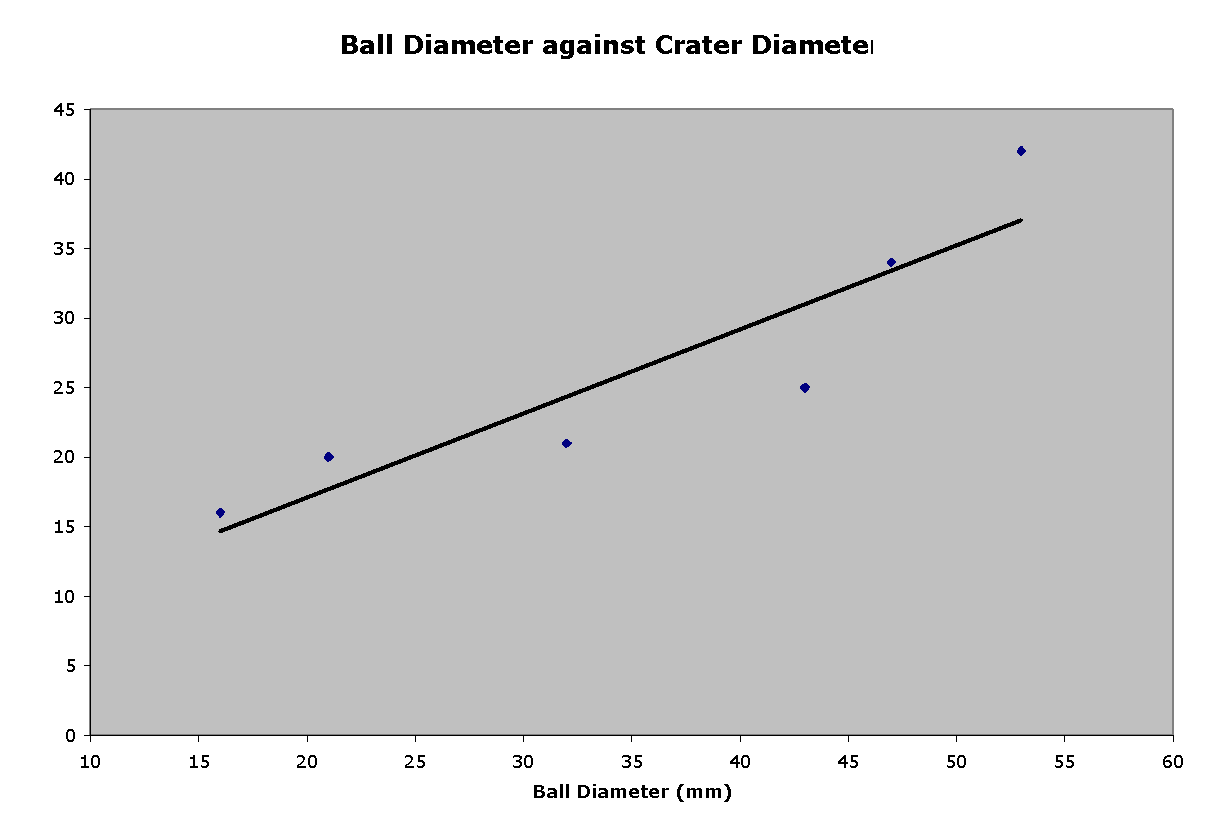 Another linear relationship – this time it is looser though. This could be due to the masses of the balls being slightly different. It was very difficult to find balls with similar masses – it would have been near impossible to find so many balls with identical masses.

Again the graph produces no surprises, as you would expect a ball with a larger diameter to produce a larger crater. The linear relationship would suggest that there is a constant that could be found and applied to balls of any diameter.

The following relationships were found:

On the whole, the experiment was a success, however there are a few problems which would be solved if the experiments were to be repeated.

Firstly, for the final experiment, the landing tray was not long enough to slow  down balls travelling at high speed. A longer tray would have been able to produce a wider range of results.

Also the sand was difficult to keep perfectly level, and its compactness was hard to measure/control. This could have lead to some inaccurate results, as sometimes the ball would simply sink into the sand, but on other occasions it would roll across the top – giving a much larger distance. Possibly a rake or a large flat object could have been used to level the sand and break up any clumps.