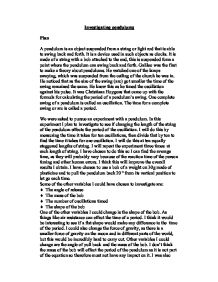 A pendulum is an object suspended from a string or light rod that is able to swing back and forth. It is a device used in such objects as clocks. It is made of a string with a bob attached to the end, this is suspended form a point where the pendulum can swing back and forth. Galileo was the first to make a theory about pendulums. He watched one of the lamps swaying, which was suspended from the ceiling of the church he was in. He noticed that as the size of the swing (arc) got smaller the time of the swing remained the same. He knew this as he timed the oscillation against his pulse. It was Christiaan Huygens that came up with the formula for calculating the period of a pendulum’s swing. One complete swing of a pendulum is called an oscillation. The time for a complete swing or arc is called a period.

The reason I have devided the last column by ten is because the lengths of the string are in centimetres and gravity is in metres per second and the units need to be kept the same.

I found that in the predicted results I could estimate the period of a pendulum of any given length if I had the results for one given length’s period.

If I had the period for a piece of string of 10cm, then I could find the time for one oscillation of a pendulum with a length of 20 by this formula:

So as we are doubling the length we times the period by the square root of 2.

If you look up at the table of predicted results, 0.89 is the predicted period of a pendulum of a 20cm length.

This formula also works for any length you want to find. You just times the given period by the square root of the number of times bigger the length of string is you want to find the period for.

So if we wanted to find the period if the string was 50cm then we would times the period for one oscillation at 10cm by the square root of 5 because 50cm is 5 times bigger than 10cm:

As you can see from my table of predicted results, this was also correct.

I think my results were quite accurate and we only had one result that was extremely different. This was our only anomaly and I think it was caused because we were nor really concentrating and being entirely accurate.

I think this experiment could be made more accurate if we had had more time to pursue it, we would have been more accurate with our measurements. One of the main problems we had with this experiment was keeping the retort stand steady. When the string was at its longest length the stand would wobble. We overcame this problem by putting lots of weights on the base and it eventually worked. I think that if we took more readings at each length then we could possibly draw a better conclusion.