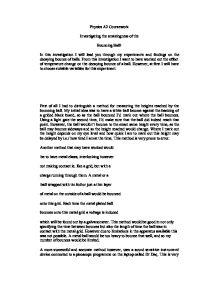 Investigating the amazingness of theBouncing Ball!

Investigating the amazingness of the

First of all I had to distinguish a method for measuring the heights reached by the bouncing ball. My initial idea was to have a white ball bounce against the backing of a grided black board, so as the ball bounced I’d mark out where the ball bounces. Using a light gate the second time, I’d make sure that the ball did indeed reach that point. However, the ball wouldn’t bounce to the exact same height every time, as the ball may bounce sideways and so the height reached would change. Where I mark out the height depends on my eye level and how quick I am to mark out this height may be delayed by i.e./ how tired I am at the time. This method is very prone to error.

Another method that may have worked would

be to have metal claws, interlocking however

charge running through them. A metal or a

ball wrapped with tin foil or just a thin layer

of metal on the outside of a ball would be bounced

onto this grid. Each time the metal plated ball

bounces onto this metal grid a voltage is induced

which will be found out by a galvanometer.

As my second part of the experiment I will be testing out the effect of temperature on the silicone and rubber balls, I’m expecting that the higher the temperature the higher the coefficient of restitution, and the lower the decay constant. Rubber and Silicone are made up of polymer chains, to make up the balls these chains are entwined within each other, and mainly held together by covalent bonds (Intermolecular forces). When the ball hits the surface this exerts a force on these polymer chains stretching them out. The Intermolecular forces between the polymer chains then act against this force to ‘re-entwine’ the polymer chains. So I believe that the hotter the ball the more energy supplied to the polymer chains, making them more stretchy so the Intermolecular forces re-entwine the chains quicker. The quicker the chains re-entwine the more energy conserved by the ball and so the higher its return bounce, so the higher thenumber of bounces achieved and so the lower the decay constant. Therefore making the balls more elastic, and so the collisiions more elastic (higher coefficient of restitution) with increasing temperature.

The Effect Of Temperature

On A Rubber Ball (Preliminary)

This preliminary will be done to test out that indeed there is a noticeable change of the properties of the rubber ball at different temperatures. This will be done by conducting the planned method at the highest and lowest temperatures and investigating its variables. The aim of this investigation is to see how temperature effects different balls and why. The effects of temperature will be established using the decay constant and the coefficent of restitution  that will be found from my results using theH = H0 e-λb (decay constant)

The decay constant has an exponential relationship with temperature, however Ln(DC) has a linear relationship when plotted against temperature; yet again having only four values gives rise to XX% error.

Then a relationship can be developed.

I have plotted a graph (with error XX%) of;

to find out exactly what b is. From the equations I have rearranged, b is meant to stand for the number of bounces, this could mean the maximum or average number of bounces achieved at each tamperature. However my graph of ln (CoR)2 against λ (graph –b) has a positive gradient meaning that the overal b value is negative, it therefore cannot stand for the number of bounces. Another alternative is that b could just be a constant with another meaning other than bounce number. So some kind of relationship is being shown by graph (-b) however what it is is not quite understandable. Perhaps if I’d had more than four results to work from I may have come up with a more solid conclusion, however due to the lack of time and suitable apparatus this was not possible.