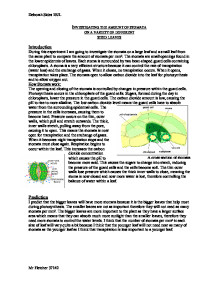 Investigating the amount of stomata on a variety of different sized leaves.

INVESTIGATING THE AMOUNT OF STOMATA ON A VARIETY OF DIFFERENT SIZED LEAVES Introduction During this experiment I am going to investigate the stomata on a large leaf and a small leaf from the same plant to compare the amount of stomata per mm�. The stomata are small openings found in the lower epidermis of leaves. Each stoma is surrounded by two bean-shaped guard cells containing chloroplasts. A stoma is a very efficient structure because it can control the rate of transpiration (water loss) and the exchange of gases. When it closes, no transpiration occurs. When it opens, transpiration takes place. The stomata open to allow carbon dioxide into the leaf for photosynthesis and to allow oxygen out. How Stomata work: The opening and closing of the stomata is controlled by changes in pressure within the guard cells. Photosynthesis occurs in the chloroplasts of the guard cells. Sugars, formed during the day in chloroplasts, lower the pressure in the guard cells. The carbon dioxide amount is low, causing the pH to rise to more alkaline. The low carbon dioxide level means the guard cells have to absorb water from the surrounding epidermal cells. The pressure in the cells increases, causing them to become hard. Pressure occurs on the thin, outer walls, which pull and stretch outwards. The thick, inner walls stretch, pulling away from the pore, causing it to open. ...read more.

Straight away I can see that the bigger leaf has more stomata per mm� than the smaller leaf. This links back to my prediction as I predicted that the bigger leaf would need more stomata for transpiration and the exchange of gases. The bigger leaves will absorb much more sunlight as they have a bigger surface area consequently they have more chloroplasts. Therefore they must be able to take in lots more water to keep the water levels in the leaf balanced. The bigger leaves also need a larger surface area for the exchange of gases during photosynthesis. They need to produce as much food as possible therefore it is important that these leaves absorb as much carbon dioxide as possible. The bigger leaves therefore need more stomata to increase the amount of gases that can be exchanged and to have a more controlled water balance. The next thing I noticed that within each leaf all the results where very similar and compact, there was not a wide range of results. In the bigger leaf the range was 3 and in the smaller leaf the range was 4. This shows that in different parts of the leaf the amount of stomata per mm� stays the same. There was some variable which shows that different parts of the plant do have different numbers of stomata per mm� but the difference is not very significant. ...read more.

I would also select more samples from the same type of plant so that my results would cover a larger area. It would also make my results fairer because taking results from lots of different leaves would mean that any leaves that had maybe less water or where dying would be able to be noticed and the results would not be noted from that particular leaf. From the experiment I did there could be the problem that maybe one of the leaves was less strong than the other and this may affect the amount of stomata per mm� so my experiment could be more accurate. This may also be another reason that there wasn't a great difference between the number of stomata per mm� on the small leaf and the number of stomata per mm� on the bigger leaf. I think that my readings were adequate enough to be able to see that a bigger leaf does have more stomata but I would have to carry out further experiments to investigate this further and perhaps get a clearer conclusion. I would be able to extend this experiment with a different investigation by testing leaves from other plants and seeing if the plants environment affects the number of stomata. By carrying out this investigation it would provide me with a much clearer idea of how stomata work and what affects them, whether it is size of leaf, environment or a combination of other things as well. Deborah Sides 10JL Mr Fletcher 37142 ...read more.