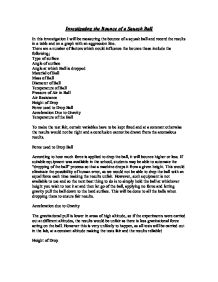 Investigating the Bounce of a Squash Ball

Investigating the Bounce of a Squash Ball

In this investigation I will be measuring the bounce of a squash ball and record the results in a table and on a graph with an aggression line.

There are a number of factors which could influence the bounce these include the following;

Angle at which Ball is dropped

Pressure of Air in Ball

Acceleration Due to Gravity

Temperature of the Ball

To make the test fair, certain variables have to be kept fixed and at a constant otherwise the results would not be right and a conclusion cannot be drawn from the anomalous results.

According to how much force is applied to drop the ball, it will bounce higher or less. If suitable equipment was available in the school, students may be able to automate the “dropping of the ball” process so that a machine drops it from a given height. This would eliminate the possibility of human error, as we would not be able to drop the ball with an equal force each time making the results unfair.

A larger ball with a larger diameter will have a bigger surface area meaning that when it hits the floor, more of its area will be in contact with floor at impact and this will affect its bounce back height. For this reason, to make the test fair, the same sized ball with the same diameter will be used.

Different surfaces have different smoothness and changing the surface half way during the experiment will make the test unfair as some surfaces according to their smoothness will allow a nice, neat bounce whereas other surfaces will alter the bounce due to indentation in the surface and bumps etc. To make the test fair, all testing will be done on a bench surface throughout the experimenting procedure.

The angle of the surface at which the ball is bounced on will affect how it bounces back up and how far too. To overcome this, a surface, which is horizontally straight, will be chosen to experiment on. This same surface will then be used so that there will not be any change in its angle making the test fair.

Angle which Ball is dropped at

The graph of the average results is over the page.

The results are what I expected them to be, the higher the temperature of the ball the higher the bounce, my hypothesis was correct. According to my results if the ball had been 80ºC then the average result would be a lot higher.

If I had measured the second bounce I would have found a difference as the energy would have been lost to sound and through the ground.

I believe the experiment was a success as I have gained no anonymous results in the table above.