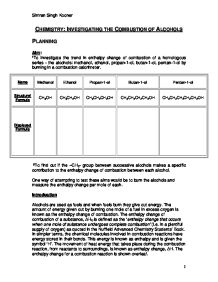 Investigating the Combustion of Alcohols

This is because if the flame is broader at the base, much of the alcohol is not completely burned and a deposit of carbon may be seen on the sides (which was evident during the experiment). This also prevents efficient energy transfer. * When the hot spirit burner is extinguished, there is considerable evaporation. To reduce this effect, a metal cap could be placed over the wick to extinguish the flame and to trap any alcohol vapour so there is no inaccuracy in the mass of the alcohol when it is re-weighed at the end. * Use a fume cupboard instead of heat proof mats as heat shields. I think that the fume cupboard would greatly reduce the effect of draught and heat loss. * Although the copper combustion calorimeter used in this experiment is insulated, some heat will be lost from it. A bomb calorimeter could be used as an alternative. The apparatus is specially designed to avoid heat losses by completely surrounding the 'bomb' with water. Diagram: A Bomb Calorimeter * The experiment could be caried out in an oxygen rich area to prevent incomplete combustion. For the investigation to be furthered, some factors could be altered to see their affect on the enthalpy changes of the alcohols. These altered factors could be the same as to those used in this investigation: the distance from the wick and metal calorimeter, the amount of water in the metal calorimeter and lastly the temperature rise in which the water in the calorimeter should rise by. All other factors not being measured should be carefully controlled while one factor is being studied. One other way to further the investigation could be to look into the enthalpy changes for other homologous series such as alkanes and alkenes. Once results from the enthalpy changes for any of these other compounds have been established, they can be compared to those of the results from the combustion of alcohols and any similar trends can be noted down easily. ...read more.