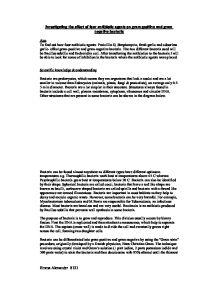 Investigating the effect of four antibiotic agents on gram positive and gram negative bacteria Aim To find out how four antibiotic agents- Penicillin G, Streptomycin, fresh garlic and odourless garlic- effect gram-positive and gram-negative bacteria. The two different bacteria used will be Bacillus subtilis and Escherichia coli. After transferring the antibiotics to the bacteria I will be able to look for zones of inhibition in the bacteria where the antibiotic agents were placed. Scientific knowledge & understanding Bacteria are prokaryotes, which means they are organisms that lack a nuclei and are a lot smaller in volume than Eukaryotes (animals, plants, fungi & protoctists), on average only 0.5-5 m in diameter. Bacteria are a lot simpler in their structure. Structures always found in bacteria include a cell wall, plasma membrane, cytoplasm, ribosomes and circular DNA. Other structures that are present in some bacteria can be shown in the diagram below. Bacteria can be found almost anywhere as different types have different optimum temperatures e.g. Thermophilic bacteria work best at temperatures above 45 C whereas Psychrophilic bacteria grow best at temperatures below 20 C. Bacteria can also be identified by their shape. Spherical bacteria are called cocci, bacteria that have a rod like shape are known as bacilli, corkscrew shaped bacteria are called spirilla and bacteria with a thread like appearance are termed filamentous. Bacteria are important in most habitats as they help to decay and recycle organic waste. However, some bacteria can be very harmful. For example, Mycobacterium tuberculosis and M.Bovis are responsible for Tuberculosis, an infectious disease. Most bacteria are harmless and are very useful. Bacitracin is an antibiotic produced by Bacillus subtilis that prevents wall synthesis in some bacteria. The purpose of bacteria is to grow and reproduce. This division usually occurs by binary fission. First the DNA is replicated and then attaches to mesosomes, which help to separate the DNA. The septum (cross-wall) ...read more.

The many properties that garlic possesses suggest that it would be effective against Bacillus subtilis; therefore I think there will be a noticeable zone of inhibition. Odourless garlic Odourless garlic capsules are popular, as they do not possess the pungent lingering odour that makes the fresh herb so easily recognised. However, once the garlic has been condensed into capsules, the active ingredient allicin is lost through the smell. If this ingredient has not been somehow preserved in the capsules used in the investigation then they will not be effective in inhibiting the growth of bacillus subtilis. Escherichia coli Penicillin G From my research, Penicillin G is only effective against gram-positive bacteria therefore I expect to see no inhibition of E.coli. This is because the mode of action of this antibiotic is not effective against the different structure of the gram-negative cell wall. Penicillin G can only inhibit cell wall synthesis in gram-positive bacteria. Streptomycin This antibiotic is very effective in destroying gram-negative bacteria by inhibiting protein synthesis. Since E.coli is a type of gram-negative bacteria, I predict that there will be a zone of inhibition surrounding Streptomycin, as the antibiotic will prevent the processes occurring at the ribosome. Fresh garlic I predict that the fresh garlic will be successful in inhibiting Escherichia coli. Allicin is proven to be effective against Escherichia coli. The allicin prevents cell membrane biosynthesis, inhibiting DNA polymerises and RNA synthesis, therefore disrupting the enzyme system that is responsible for cell replication. Odourless garlic The active ingredient, allicin, is likely to have been lost at some point when the capsules were manufactured, therefore it will not be present to inhibit the growth of E.coli. New methods to preserve the allicin in the capsules are very unlikely to have been applied to the capsules that are to be used in the investigation. Therefore, I predict that the odourless garlic capsules will not prevent the growth of Escherichia coli. Hypotheses: > Odourless garlic will not be effective against either of the two bacteria. ...read more.

* Remember to label each section with the antibiotic using the permanent marker pen. * When all the antibiotic agents have been successfully transferred to the plate, seal it with two small pieces of sellotape (as shown in the diagram below). Never place the tape all around the circumference of the dish as this prevents oxygen entering the dish and creates anaerobic conditions in which harmful pathogens are able to grow. * Place the labelled petri dish upside down in the incubator so that the bacteria are able to respire and grow. * Leave the plates in the incubator for 24hours, after which period they can be removed and any zones of inhibition can be measured. The zone of inhibition is the distance from the disc to the outermost section around the disc where no bacterial growth is present. DIAGRAM OF DISH WITH ANTIBIOTIC AGENTS Method justification The above methods are the best way, using the equipment described in the equipment list, to ensure that aseptic techniques are used throughout the investigation. The equipment chosen is to ensure the investigation is as accurate and precise as possible and to take into account the precautions outlined under the safety subheading. Range and number I will use two different bacteria in this investigation. These are Bacillus subtilis and Escherichia coli. The four different antibiotic agents being used are Penicillin G, Streptomycin, fresh garlic and odourless garlic. I will prepare 6 petri dishes and then inoculate three of them with B.sub and the other three with E.coli so that I have two repeats for each bacterium, making the investigation more reliable. I will then work with someone else's results who has worked well using aseptic techniques and has used the same batch of bacteria. Therefore I will have six results for each bacterium. This means that I will be able to compare results to observe how similar they are and recognise any anomalies more easily. ...read more.