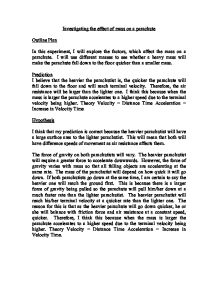 Investigating the effect of mass on a parachute

Investigating the effect of mass on a parachute

In this experiment, I will explore the factors, which affect the mass on a parachute.  I will use different masses to see whether a heavy mass will make the parachute fall down to the floor quicker than a smaller mass.

I think that my prediction is correct because the heavier parachutist will have a large surface area to the lighter parachutist.  This will mean that both will have difference speeds of movement as air resistance affects them.

After constructing a pilot test, I have come to the following conclusions to amend my detailed plan (method): I am no longer going to use a mass of up to 25g of plastercene in the experiment.  Instead, I will use six masses, which will go up in 2g so they will be 2g, 4g, 6g, 8g, 10g, and 12g.  I have altered the mass of plastercene because I found it difficult to record a result with the stopwatch as the cone went down too quick when 15g of plastercene was put into the cone.  Therefore, if I use up to 25g of plastercene it will be impossible to record an accurate result.  In addition, I am now going to use a clamp stand to keep the 2m ruler straight and still, which will mean that the height that the cone will is dropped from will be exactly 2m.  I am going to measure the plastercene every time I repeat the experiment because the mass might alter when fallen down.

I am going to amend the results table by putting an extra column with the heading ‘averages’.  I will be adding this extra heading because it will give a more accurate view, overall of the results I have obtained.  I will lastly change the masses of the table which will be ‘0g, 2g, 4g, 6g, 8g, 10g, and 12g.

To develop this investigation further, I could conduct an experiment of how the surface area of a parachute affects the speed.  This will link with the investigation I have done because mass and surface area both affect the speed of a parachute.   Also, I could get a range of different masses being dropped from a higher distance (e.g. 4 meters) and I could use heavier masses of plastercene and see the effects of the cone when the height is brought up and the mass is increased.