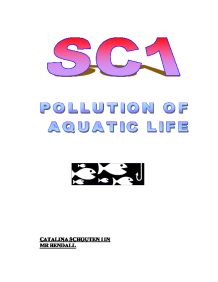 CATALINA SCHOUTEN 11N MR BENDALL AIM: In this investigation I will be investigating the effect pollution has on aquatic life. In this case I will be using a Daphnia (water flea). I am planning to do this by placing the Daphnia in a petri dish with pond water and I will be adding the pollutant Caffeine. Then I will be measuring its heart rate. Background Information Humans affect the water because of various reasons. One reason is because of untreated sewage in the water. Micro-organisms that break down the sewage use up a lot of oxygen in the water. Pesticides also pollute the water. They are mainly used on farms, so therefor lakes and ponds near farms get polluted regularly. This is because when it rains, the chemicals dissolve and seep into the soil. The chemicals then get into the lakes or rivers. Pollutants also use up oxygen in the water. Therefore living organisms die because of the lack of oxygen. The pollutant that we are using in this experiment is caffeine. Caffeine is found in tea, coffee and kola nut. ...read more.

Prediction I predict that the higher the concentration of caffeine gets the faster the heart rate of the Daphnia gets. My reason for this is because pollution in water uses up all the oxygen in the water. Therefore the heart rate of the Daphnia won't get as much oxygen as it need and it will beat faster. Method 1. First of all, we will catch a Daphnia. We will put the daphnia into a petri dish with some pond water and Vaseline. The daphnia's bottom will be placed into the Vaseline. This is because it will prevent the daphnia from swimming away. 2. We will take the normal heartbeat of the daphnia without any caffeine. Once the daphnia has calmed down, we will add the pollutant (caffeine) to the petri dish. 3. Then we will put a microscope over the daphnia and count its heartbeat. The way we will do is by looking at its heart and counting it for 15 seconds. Then we will multiply the result by 4 to get our minutes worth. 4. We will repeat this another two times to get a fair test. ...read more.

When it reached its peak point, its heartbeat went down, and I came to the conclusion that the daphnia might have got distressed and its body slowed down. The graphs showed different results because we used different daphnias, and some of the daphnias were stronger than others, which might have made the investigation unfair. Evaluation I think that the experiment was a success and everything had gone to plan. The results recorded are reliable and accurate. However, we did change some of our plan. Instead of counting the daphnia's heartbeat for 15 seconds and then multiplying by four to get a minute worth, we counted for a full minute. We did this because we felt that if we only counted for fifteen seconds, it would not be a fair test. This is because the heartbeat could have increased, or decreased for the other 45 seconds. We also changed the daphnias we were using for every experiment. This was because the first one we used, it died. So we decide to use different daphnias for every experiment to make it fair. The experiment was done safely and accurately. Care was used to make sure that there were no spillages, but there wasn't anything we could have done to stop the daphnia from dying. ?? ?? ?? ?? ...read more.