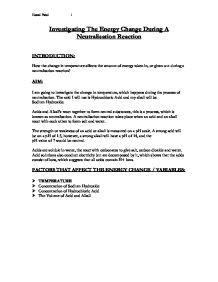 Investigating The Energy Change During A Neutralisation Reaction.

Investigating The Energy Change During A Neutralisation Reaction INTRODUCTION: How the change in temperature affects the amount of energy taken in, or given out during a neutralisation reaction? AIM: I am going to investigate the change in temperature, which happens during the process of neutralisation. The acid I will use is Hydrochloric Acid and my alkali will be Sodium Hydroxide. Acids and Alkali's react together to form neutral substances, this is a process, which is known as neutralisation. A neutralisation reaction takes place when an acid and an alkali react with each other to form salt and water. The strength or weakness of an acid or alkali is measured on a pH scale. A strong acid will be on a pH of 1.5, however, a strong alkali will have a pH of 14, and the pH value of 7 would be neutral. Acids are soluble in water, the react with carbonates to give salt, carbon dioxide and water. Acid solutions also conduct electricity but are decomposed by it, which shows that the acids consist of ions, which suggests that all acids contain H+ ions. FACTORS THAT AFFECT THE ENERGY CHANGE / VARIABLES: > TEMPERATURE > Concentration of Sodium Hydroxide > Concentration of Hydrochloric Acid > The Volume of Acid and Alkali INDEPENDANT VARIABLE: The factor I will change during the experiment will be the amount of Hydrochloric acid. ...read more.

> A Beaker > Polystyrene Cup > Thermometer > Burette > Glass Rod DIAGRAM: FAIRNESS: To keep the experiment fair certain things will need to be done and kept the same whilst one variable is changed. I have chosen to vary the temperature. Firstly, and most importantly, I will have to get the measurements of the hydrochloric acid, sodium hydroxide and water as accurate as possible. I will make sure that the amounts of hydrochloric acid are accurate, the sodium hydroxide is the same amount 20ml and I keep it at 1molar all the time, also the amount of water I dilute it with has to be accurately measured as it could interfere with my results. Secondly, I must make sure I am accurate with measuring the temperature at the beginning of the experiment. Also, when adding the acid in the sodium hydroxide and water I must make sure the stop clock is started at the same time. I must make sure that I am accurate with starting and stopping the stop clock; otherwise this factor could meddle with my results as well. When measuring the temperature after the reaction has taken place and the one-minute is up I must make sure this is measured accurately as this is the result, which is most important. ...read more.

If I conducted this experiment again, I would change some of the experiment, I would change the timing I would allow more time for the reaction to take place so I would get clearer results, I would increase the time by a minute, so hopefully altogether two minutes would be enough for the reaction to fully take place in. The clearer results would enable me to produce accurate graphs. I would also make sure my measurements were accurate if I was to do the experiment again, I would use a pipette to gain a more precise measurement of the acid and alkali, and in a larger-scale a measuring cylinder. I believe that my experiment was fair. I followed all of the guidelines that I set out to make a fair test. The only difficulty I had was that I had put a time limit on the reaction-taking place so I would not no when the reaction finished and I could have gained better results if there was not a limit on it. To gain extra information for my scientific knowledge, I could have used more textbooks to make the information more detailed. To conclude I feel that that this investigation was carried out very carefully, my results turned out good and my graphs were plotted with great accuracy. Henal Patel 1 ...read more.

****
A good account of the experiment with clear explanations of the steps followed and detailed background information. A little more careful use of scientific terminology would be be helpful however.