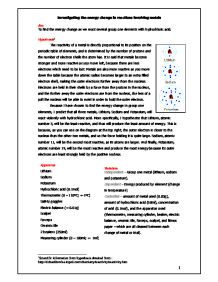 Investigating the energy change in reactions involving metals Aim To find the energy change as we react several group one elements with hydrochloric acid. Hypothesis1 The reactivity of a metal is directly proportional to its position on the periodic table of elements, and is determined by the number of protons and the number of electron shells the atom has. It is said that metals become stronger and more reactive as you move left, because there are less electrons which need to be lost. Metals are also more reactive as you move down the table because the atomic radius becomes larger to an extra filled electron shell, making the outer electrons further away from the nucleus. Electrons are held in their shells by a force from the protons in the nucleus, and the further away the outer electrons are from the nucleus, the less of a pull the nucleus will be able to exert in order to hold the outer electron. Because I have chosen to find the energy change in group one elements, I predict that all three metals, Lithium, Sodium and Potassium, will react violently with hydrochloric acid. More specifically, I hypothesize that Lithium, atomic number 3, will be the least reactive, and thus will produce the least amount of energy. ...read more.

Also, we could look at the smaller things, like the uncontrolled variables, which can sometimes have a very big effect on results, such as air pressure and room temperature. Another problem, as I have mentioned earlier, is how we used grams to measure the weight of the metals instead of moles. This directly interfered with our results as it gave us the complete opposite figures, which can also be seen as one of the factors which makes our results unreliable. This can also be used as an improvement or something to bear in mind in case I ever repeat a similar experiment, because if I use moles instead of grams, then I am able to truly test my hypothesis. Another improvement, or a way to take my experiment further, would be by using the same elements, but in different solvents; for example, in sulphuric and nitric acid, as well as water. Also, I could work with all the group one elements, using moles, so I could fully test the theory that metals become more reactive as we descend. Also, I could experiment across the periodic table of elements, or only test the transition metals in acid, to see what happens, and hopefully, find some successful patterns and comparisons. Furthermore, I could try measure the energy change with pH, to see if there was any difference. 1Scientific information from hypothesis obtained from : http://richardbowles.tripod.com/chemistry/reactivity/reactivity.htm ?? ?? ?? ?? 1 ...read more.