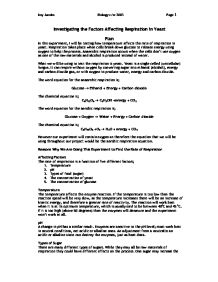 Investigating the Factors Affecting Respiration in Yeast Plan In this experiment, I will be testing how temperature affects the rate of respiration in yeast. Respiration takes place when cells break down glucose to release energy using oxygen to help the process. Anaerobic respiration occurs when the cells don't use oxygen as one of the raw materials and alcohol is produced instead of water. What we will be using to test the respiration is yeast. Yeast is a single celled (unicellular) fungus. It can respire without oxygen by converting sugar into ethanol (alcohol), energy and carbon dioxide gas, or with oxygen to produce water, energy and carbon dioxide. The word equation for the anaerobic respiration is; Glucose -> Ethanol + Energy + Carbon dioxide The chemical equation is; C6H12O6 -> C2H5OH +energy + CO2 The word equation for the aerobic respiration is; Glucose + Oxygen -> Water + Energy + Carbon dioxide The chemical equation is; C6H12O6 +O2 -> H2O + energy + CO2 However our experiment will contain oxygen so therefore the equation that we will be using throughout our project would be the aerobic respiration equation. Reasons Why We Are Doing This Experiment to Find the Rate of Respiration Affecting Factors The rate of respiration is a function of five different factors; 1. Temperature 2. pH 3. Types of food (sugar) 4. The concentration of yeast 5. The concentration of glucose Temperature The temperature affects the enzyme reaction. If the temperature is too low then the reaction speed will be very slow, as the temperature increases there will be an increase of kinetic energy, and therefore a greater rate of reactivity. The reaction will work best when it is at its optimum temperature, which is usually said to be between 40oC and 45 oC. ...read more.

At 30oC, which is below what I believe may be the optimum temperature, we can see how fast yeast would respire if the temperature is not as high as it could be. 1. Collect all apparatus listed. 2. Heat the water to the temperature you are aiming for (30o, 40o, etc). Make sure it is as close to your intended temperature as possible. 3. Fill your syringe first with the glucose solution, then the yeast suspension. After you have the right amount pull the lever back enough so you have the amount of air you are going to use in the test. 4. When all this is ready attach a clamp to your syringe so it will be kept underneath the water and won't try to float up. 5. Record the temperature at which your water is when you place the syringe in the bath. 6. Start the stopwatch as soon as you put the syringe in the bath. Do not count the bubbles escaping the syringe until you have passed the air mark (preliminary test). 7. As soon as that time has passed start counting the bubbles coming out of the syringe, make sure to keep the stopwatch going - you need to know when your time is up. 8. Keep counting the bubbles until your set time is up. 9. Record the end temperature before anything. 10. Clean your equipment up and fill out the result table for that test. 11. If you are doing another test at the same temperature then you are able to keep the same yeast and sugar mixture. Repeat the same method from step 5 onwards. Make sure that the temperature is as close to the intended degree as possible before you begin the next test. ...read more.

However there was one part of one of the tests that gave me very erratic results. The temperature that I was testing was 40oC which is said to be the optimum temperature for yeast to respire. While this may be true the first test I did at this temperature showed me that the yeast had only produced two bubbles after six minutes and a half. Looking at the graph that shows us the average amount of bubbles found at each temperature we can see that what is said about 40oC is true. In spite of this I had to restart this test because of the first reading that I took, to find out whether the experiment was incorrect or I had done something wrong. After I had repeated this fragment of the project and saw that many bubbles were produced I knew I had done something wrong when I prepared the syringe, however I do not know what I did wrong though I suspect that I might not have sucked any air in and therefore the respiration would be done anaerobicly , not aerobically. This means that not as much energy would be produced and therefore not as much CO2 would be generated, so not many bubbles would come out of the syringe. Evidence Means? The evidence that I have collected shows me that the optimum temperature is 40oC as the textbooks have said, the enzymes have denatured not at 50 oC as we believed but at 70 oC. We can see that the yeast respired at 30 oC quite well which was quite expected. However if I had done three tests at a lower temperature (20 oC) than I may have found out at what temperature the enzymes have not got enough heat to respire. Imy Jacobs Biology c/w 2003 Page 1 ...read more.