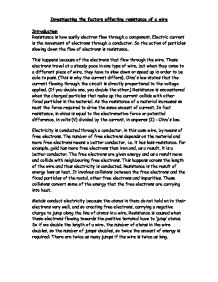 Investigating the factors effecting resistance of a wire.

Investigating the factors effecting resistance of a wire

Resistance is how easily electron flow through a component. Electric current is the movement of electrons through a conductor. So the action of particles slowing down the flow of electrons is resistance.

This happens because of the electrons that flow through the wire. These electrons travel at a steady pace in one type of wire, but when they come to a different piece of wire, they have to slow down or speed up in order to be able to pass. (This is why the current differs). Ohm's law states that the current flowing through the circuit is directly proportional to the voltage applied. (If you double one, you double the other.) Resistance is encountered when the charged particles that make up the current collide with other fixed particles in the material. As the resistance of a material increases so must the force required to drive the same amount of current. In fact resistance, in ohms is equal to the electromotive force or potential difference, in volts (V) divided by the current, in amperes (I) - Ohm's law.

Use the same wire throughout the experiment, to keep diameter exactly the same. Use an ammeter and a voltmeter to measure the figures accurately and to 2 decimal places. I would do the experiment in the same environment every time, so the temperature would be the same, so the resistance of the wire is not changed.

To keep this experiment as accurate as possible we need to make sure, firstly, that the length of the wire is measured precisely from the inside edge of the crocodile clips, making sure that the wire is straight when we do this. We must also make sure that the wire is straight when we conduct the experiment. If it is not, short circuits may occur and bends and kinks in the wire may affect the resistance. The reading that we take of the voltage should be done fairly promptly after the circuit is connected.