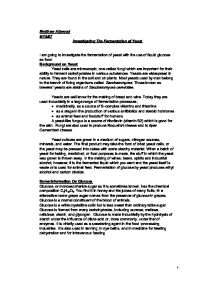 Investigating The Fermentation of Yeast

Matthew Attwood 8/12/97 Investigating The Fermentation of Yeast I am going to investigate the fermentation of yeast with the use of liquid glucose as food. Background on Yeast Yeast cells are microscopic, one-celled fungi which are important for their ability to ferment carbohydrates in various substances. Yeasts are widespread in nature. They are found in the soil and on plants. Most yeasts used by man belong to the branch of living organisms called Saccharomyces. Those known as brewers' yeasts are strains of Saccharomyces cerevisiae. Yeasts are well know for the making of bread and wine. Today they are used industrially in a large range of fermentation processes; * medicinally, as a source of B-complex vitamins and thiamine * as a stage in the production of various antibiotics and steroid hormones * as animal feed and foodstuff for humans. A yeast-like fungus is a source of riboflavin (vitamin B2) which is good for the skin. Fungi are also used to produce Roquefort cheese and to ripen Camembert cheese. Yeast cultures are grown in a medium of sugars, nitrogen sources, minerals, and water. The final product may take the form of dried yeast cells, or the yeast may be pressed into cakes with some starchy material. When a batch of yeast for baking, medicinal, or food purposes is made, the stuff in which the yeast was grown is thrown away. In the making of wines, beers, spirits and industrial alcohol, however, it is the fermented liquid which you want and the yeast itself is waste or is used for animal feed. ...read more.

By looking at my results it appears that my prediction was wrong. The yeast did take some time to start to ferment but in the twenty minutes of the experiment not one bubble emerged form the tube. I think this may have been caused by excess pressure in the rubber tubes, for the ends of the two tubes were under more water than was necessary. Another reason for these results may be that the yeast was too cold in the test tubes to ferment well . Also the ends of the rubber tubes are quite a large diameter needing quite a lot of gas build-up before any bubbles are given off. Experiment two To see if the tube diameter and pressure were the cause for the lack of bubbles, I shall now do a similar experiment but I shall use some special glass tubes to go into the water. These fit into the rubber tubing and taper at the other end to a small diameter hole. This should make it easier for the bubbles to be seen because it will only take a small amount of gas to make them. I am also going to reduce the depth of the water the tubes are placed in to reduce the pressure. This will hopefully allow the bubbles to flow out with more ease. I predict that with these changes to the original experiment I shall record at least some bubbles per minute. ...read more.

By doing these experiments I found that yeast need a continuos supply of glucose and a constant heat to ferment as well as they can. I do not think my results were as accurate as possible even though I tried to create conditions that were the same for the experiments to create a 'fair test'. The problems that occured during the experiments were as follows; * I could not control the amount of bacteria that were in the yeast/water solution in each of the test tubes. * I could not keep the test tubes at a constant heat. * I could not keep feeding glucose into the test tubes with out taking out some of the yeast/glucose mixture. * I could not make sure that there were equal amounts of pressure on each rubber tube/glass rod. * I only had a certain amount of time in which I could only do a certain amount of experiments. * I would have liked to of taken the temperature at each interval when I recorded the amount of bubbles given off by the two test tubes but I didn't. If I was to do the experiments again I would take more care in controlling the problems that I had this time. Because of the problems I experienced and lack of results, I do not think I can come to a firm conclusion, though by doing some research I can write down the equation to show what happens when yeast ferments, showing what they need to ferment and what the waste products are (shown on next page). 1 ...read more.