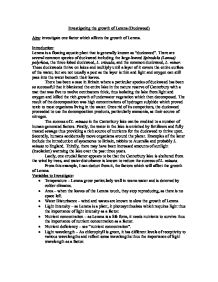 Investigating the growth of Lemna (Duckweed)

Investigating the growth of Lemna (Duckweed) Aim: investigate one factor which affects the growth of Lemna. Introduction: Lemna is a floating aquatic plant that is generally known as "duckweed". There are several common species of duckweed including the large-leaved Spirodela (Lemna) polyrhiza, the three-lobed duckweed, L. triscula, and the common duckweed, L. minor. These duckweeds thrive on lakes and multiply until a layer of it covers the entire surface of the water, but are not usually a pest as the layer is thin and light and oxygen can still pass into the water beneath their leaves. There has been a case in Britain where a particular species of duckweed has been so successful that it blanketed the entire lake in the nature reserve of Canterbury with a mat that was five to twelve centimeters thick, thus isolating the lake from light and oxygen and killed the rich growth of underwater vegetation which then decomposed. The result of the decomposition was high concentrations of hydrogen sulphide which proved toxic to most organisms living in the water. Once rid of its competitors, the duckweed proceeded to use the decomposition products, particularly ammonia, as their source of nitrogen. The success of L. minuta in the Canterbury lake can be credited to a number of human-generated factors. Firstly, the water in the lake is enriched by fertilizers and fully treated sewage thus providing a rich source of nutrients for the duckweed to thrive upon. Secondly, humans accidentally move organisms around the planet. Examples of the latter include the introduction of sycamores to Britain, rabbits to Australia and probably L. minuta to England. Thirdly, there may have been increased amounts of sunlight (insolation) warming the lake over the past three years. Lastly, one crucial factor appears to be that the Canterbury lake is sheltered from the wind by trees, and water disturbance is known to reduce the success of L. minuta. From this example, I can deduct from it, the factors which will affect the growth of Lemna. ...read more.

1 stands for complete solution, 2 for phosphorus deficiency, 3 for potassium, 4 for nitrogen, 5 for magnesium, and 6 for iron deficiency. The measures I am taking are to ensure that the investigation and comparison will be a fair one. I will then cover the petri dishes with the lids and place them side-by-side. I will choose an area which has sufficient light intensity, but not too much as the sunlight may bleach the Lemna and kill them, to place the petri dishes. The area must not have excessive temperature fluctuations, for example, the windowsill where the temperature changes with sunrise and sunset, as that will slow the growth of the plant. Nor should there be too much air disturbance i.e. wind which, although the petri dishes have lids, may still affect the growth of the Lemna. Lastly, is to consider the amount of gas diffusion that the lid of the petri dish allows, but according to previous experience with similar experiments, the petri dish allows adequate amounts of carbon dioxide to diffuse in for plants to thrive. This is all to provide the optimum conditions for the growth of Lemna, even though they are subject to all the same conditions, whether it is extreme temperature fluctuations, ultraviolet bombardment, high winds or CO2 starvation, but these conditions will result, in the end, of the death of the test subjects and thus ruining the investigation. I will also keep a light constantly switched on above the petri dishes so they may have light throughout the entire day. But from here, arises question of the heat generated by the light which may go to the Lemna and may be different in each petri dish thus making the investigation unfair, also, the heat may make the solutions evaporate and kill the Lemna. The amount of light each petri dish gets may also be different. I will approach the problem of different amounts of heat and light affecting the petri dishes, by assuming that light intensity is directly related to the heat the petri dish receives. ...read more.

Therefore killing the plant slowly. I think that there will probably be an increase in population for a while as the solution will contain more nutrients than in the original tank, but then stop reproducing slowly due to potassium starvation. Nitrogen deficiency affects the production of protein not to mention that the four bases for DNA construction are also nitrogenous. Nitrogen is a part of the base amino acid which makes it so important for producing protein. Thus it's deficiency affects the cell processes even greater than phosphorus as it stops both DNA and protein creation. The population of Lemna will grow, thriving on the extra nutrients and the original store of nitrogen, then; stop reproducing quickly due to nitrogen deficiency. I predict that the Lemna with nitrogen deficiency will stop reproducing earlier than the Lemna with a phosphorus deficiency. Magnesium is essential in chlorophyll. Without magnesium, no new chloroplasts can be manufactured and so the Lemna cannot photosynthesize. I predict that the Lemna with magnesium deficiency will have a population increase for a longer time than any of the others. That is because the plants have their current chloroplasts that can last them for some time, and then they have a store of sugars, starches and proteins that they can use. Iron is mainly applied to produce an enzyme, cytochrome, which acts in cell respiration. Without iron, the cytochrome cannot undergo reversible oxidation and reduction reactions and thus stunting cell respiration. I predict that Lemna with iron deficiency will have a long period of population increase, but just under that of magnesium, and then stop reproduction due to difficulties in cell respiration. All the Lemna will have a period, whether short or long, of population growth due to the nutrients already taken up and stored in the plant from the original tank in which they were bred. When this store of nutrients is depleted and in combination with other factors, the Lemna will stop reproducing and begin dying out. It is only a matter of which nutrient deficiency will result in what rate of population growth and decay. ...read more.