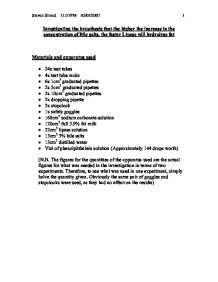 Investigating the hypothesis that the higher the increase in the concentration of Bile salts, the faster Lipase will hydrolyse fat.

Investigating the hypothesis that the higher the increase in the concentration of Bile salts, the faster Lipase will hydrolyse fat Materials and apparatus used * 24x test tubes * 4x test tube racks * 6x 1cm3 graduated pipettes * 2x 5cm3 graduated pipettes * 2x 10cm3 graduated pipettes * 2x dropping pipette * 2x stopclock * 1x safety goggles * 168cm3 sodium carbonate solution * 120cm3 full 3.9% fat milk * 22cm3 lipase solution * 13cm3 3% bile salts * 13cm3 distilled water * Vial of phenolphthalein solution (Approximately 144 drops worth) (N.B. The figures for the quantities of the apparatus used are the actual figures for what was needed in the investigation in terms of two experiments. Therefore, to see what was used in one experiment, simply halve the quantity given. Obviously the same pair of goggles and stopclocks were used, as they had no affect on the results) Method To begin with, for practicality, all of the twelve test tubes were placed in the appropriate holders in the two test tube racks. At this point, the safety goggles were then worn throughout. To these test tubes, 5cm3 of milk was placed in each, using the 5cm3 graduated pipette. ...read more.

I would also go as far as to say that the bile salts are the sole cause of an increase in reaction hydrolisation rates. In the tube with no bile salts, the hydrolisation of the fat occurred very slowly indeed. Up until that point, the times were only increasing by -at the maximum- two hundred seconds per 0.1cm3 decrease of bile alts added. When no bile salts were added, the time needed to hydrolyse all of the fat increased by about 340 seconds. This, coupled with the fact that the higher the concentration of bile salts added, the faster the reaction occurred, indicates that the correlation is in fact positive, and that the bile salts have almost catalytic properties. This is due to the fact that bile salts emulsify fats. Bile salts are secreted from the liver, where they are stored in the gall bladder (in most mammals), before passing through the bile duct and on into the intestine when food is passing through. They are steroids with detergent properties with their central purpose in digestion being to emulsify lipids in food and, more precisely in terms of this investigation, fats. It emulsifies the large fat droplets into many smaller droplets so that the lipase can 'break' the fat down, hydrolysing it into the fatty acids and glycerol fore-mentioned, that can then be absorbed through the wall of the intestine. ...read more.

The only reason it did was because this experiment was confined to a limited space of time. If I were to conduct further investigations, I would also stop the tapping motion that was used to speed up the reactions. There is a chance that one tube may have been tapped more than another and this may have affected the results. However, if one is to look at the graph, there are no blatant anomalies. So again this problem can be ruled out as having detrimental affects to the experiment. Although it is a problem that would be resolved if I had more time. To rule out the subjectivity of identifying when the mixture becomes all white, I would use universal indicator solution instead of the phenolphthalein solution. This would allow me to have more control over the observation of any pH changes that occur. In my plan, I predicted that an increase in the concentration of bile salts would result in a faster and more pronounced emulsification of the fat, leading to a faster action of the lipase on the small fat droplets. This was proved and the prediction resulted from observing the processes that occur in the mammalian body. Again my results reflect this assumption. Therefore I can assume that this investigation was accurate, reliable and more importantly, valid. Steven Stroud 11:57PM 02/05/2007 1 ...read more.