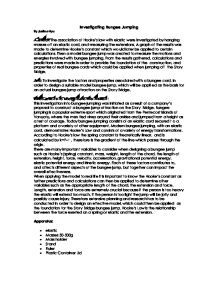 Investigating the Physics of Bunjee Jumping

Abstract: The association of Hooke’s law with elastic were investigated by hanging masses off an elastic cord, and measuring the extensions. A graph of the results was made to determine Hooke’s constant which would later be applied to certain calculations. Then a model bungee jump was created to measure the motions and energies involved with bungee jumping. From the results gathered, calculations and predictions were made in order to provide the foundation of the construction, and properties of real bungee cords which could be applied when jumping off the Story Bridge.

Aim: To investigate the factors and properties associated with a bungee cord, in order to design a suitable model bungee jump, which will be applied as the basis for an actual bungee jump attraction on the Story Bridge.

This investigation into bungee jumping was initiated as a result of a company’s proposal to construct a bungee jump attraction on the Story Bridge. Bungee jumping is a popular extreme sport which originated from the Pentecost Islands of Vanuatu, where the men tied vines around their ankles and jumped from a height as a test of courage. Today bungee jumping consists of an elastic cord secured to a platform and a variety of other equipment. Modern bungee jumping, with an elastic cord, demonstrates Hooke’s Law and consists of a variety of energy transformations. According to Hooke’s law the spring constant is theoretically linear, and is calculated by k=F÷

, therefore is the gradient of the line which passes through the origin.

So far it has been calculated:

If the strands of elastic in parallel are the same, each individual strand of elastic will have the same constant, which contributes to the greater overall constant of the parallel strands working together. For example if a strand of elastic had a constant of 5 Nm¯¹ a cord which consisted of four of these strands would have a constant of 5 + 5 + 5 + 5, or in other words the number of strands multiplied by the constant 4×5=20 Nm¯¹. If the strands are in parallel and a force is applied, each strand will share the force equally. So if there is eight strands in parallel and a 40N force applied, each individual strand will support 5N.

Each string has the same constant:

Therefore if 2 strings have a constant of 9.74Nm¯¹

One string must have half of that, so the constant of one string is 4.87Nm¯¹

If the cords are in parallel they share the force equally:

The actual mass supported by 12 cords in parallel:

This experiment was conducted in order to investigate the important features involved with bungee jump, with the intention of using the results and calculations as a foundation to produce suitable bungee cords, accommodating a range of clients, jumping from the Story Bridge. The association of Hooke’s law and the experimented elastic cord was investigated by trialling different masses and calculating extensions. From the collected results, a model bungee jump was created and a position-time graph was accumulated. These results were carefully analysed and utilised as the basis of further calculations and predictions. Equations were formed to determine the parameters of actual bungee cords which could be applied to the Storey Bridge. The maximum motions and energies experienced were calculated. This experiment could be altered to make further improvements and to increase accuracy of the gathered results. Predominantly, the expected results were derived from this experiment, and the aim was fulfilled.