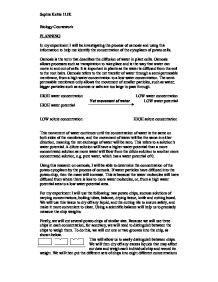 Investigating the process of Osmosis

In my experiment I will be investigating the process of osmosis and using this information to help me identify the concentration of the cytoplasm of potato cells.

Osmosis is the term that describes the diffusion of water in plant cells. Osmosis allows processes such as transpiration to take place and is the way that water can move in and out of cells. It is important in plants as the water is diffused from the soil to the root hairs. Osmosis refers to the net transfer of water through a semi-permeable membrane, from a high water concentration to a low water concentration. The semi-permeable membrane only allows the movement of smaller particles, such as water; bigger particles such as sucrose or salts are too large to pass through.

Using this research on osmosis, I will be able to determine the concentration of the potato cytoplasm by the process of osmosis. If water particles have diffused into the potato chip, then the mass will increase. This is because the water molecules will have diffused from where there is less to more water molecules, or, from a high water potential area to a low water potential area.

For my experiment I will use the following: raw potato chips, sucrose solutions of varying concentrations, boiling tubes, balance, drying tissue, knife and cutting board. We will use this tissue to dry off any liquid, and the cutting tile to ensure safety, and make it more convenient to clean. Using a scientific balance will help us to precisely measure the chip weights.

Firstly, we will cut several potato chips of similar size. Because we will use three chips in each concentration, for accuracy, we will need to distinguish between the chips to weigh them. To do this, we will cut one or two grooves into the chip, as shown below.

This will allow us to easily distinguish between chips.

I will use this method because it allows me to get at least three results for each reading in a convenient way whilst making efficient use of time. This will give me sufficient data to draw graphs, spot patterns and then draw a conclusion. I will use the range of sucrose concentrations as it helps me to get a wider range of results.

In my experiment, the variables I could change are the external solution, the concentration of the solution, the general shape or size of the chip, the temperature of the chip or the temperature of the external solution. I will change the concentration of the solution, and so in order to my experiment a fair test I will keep all other variables constant.

For my prediction, I will make three hypotheses.

Secondly, if the concentration of the potato cytoplasm is the same as the sucrose solution, then the mass will stay the same, because there will be equal amounts of water molecules in both the cytoplasm and sucrose solution, meaning that the net movement of water will be zero, causing no effect to its mass.

From performing this experiment, I have obtained sufficient and reproducible results that will allow me to spot patterns and draw conclusions from. We used three potato chips in each concentration to prove our results reliable and reproducible.

See table for results, and graph.

This table gives the water potential values for sucrose, the sugar used in my experiment. I can use these to give the potato cytoplasm cells a water potential value, rather than just a molarity compared to sucrose. I can draw a graph from these values and get the value in the same way as with the molarity graph.

My results show that the potato chip gains mass as the concentration of the sucrose solution reaches 0.2 molarity (precisely 0.21 molar). After this point, the potato chip loses mass up to 0.8 Molar.

In conclusion, I think my experiment was successful as it has allowed me to determine the concentration of the potato cytoplasm cells through osmosis.

I think my results are reliable. We performed the experiment three times at each concentration, to give us a more accurate average and took a wide range of readings. The experiment was kept fair. The procedure we followed made most efficient use of time to allow us tom perform all the experiments safely and to an accurate standard. However, from my graph it appears that the result I have for the percentage change in mass at 0.5 molar is anomalous, lying 3% outside of the line of best fit. This could be due to excess liquid on the potato cell before drying, of faulty equipment.

To improve my experiment and further my research, I could have weighed the potato cells mid way through their soak in the sucrose solution, used a wider range of concentrations or left different potato chips for different periods of time, to determine the effect of the time left in the solution. I could have tried the experiment with a salt solution instead although I think the results would be similar and method the same. Alternatively, I could have found out the usual mass of potato cytoplasm cells and instead monitored the change in mass throughout a set period of time. I could also have varied some of the other factors and see their effect on the outcome of the experiment.