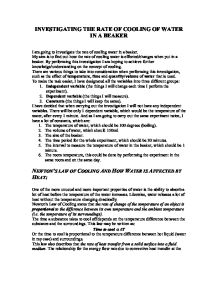 Investigating the rate of cooling water in a beaker.

INVESTIGATING THE RATE OF COOLING OF WATER IN A BEAKER I am going to investigate the rate of cooling water in a beaker. My aim is to find out how the rate of cooling water is effected/changes when put in a beaker. By performing this investigation I am hoping to achieve further knowledge/understanding on the concept of cooling. There are various things to take into consideration when performing this investigation, such as the effect of temperature, time and quantity/volume of water that is used. To make the task easier, I have designated all the variables into three different groups: 1. Independent variable (the things I will change each time I perform the experiment). 2. Dependent variable (the things I will measure). 3. Constants (the things I will keep the same). I have decided that when carrying out the investigation I will not have any independent variables. There will be only 1 dependent variable, which would be the temperature of the water, after every 1 minute. And as I am going to carry out the same experiment twice, I have a lot of constants, which are: 1. The temperature of water, which should be 100 degrees (boiling). 2. The volume of water, which should 150ml. 3. The size of the beaker. ...read more.

1 THERMOMETER. METHOD FOR CARRYING OUT EXPERIMENT: 1. Place all the equipment on the desk. 2. Make two result tables. 3. Put the water into the boiling thermos. 4. Boil the water and then pour it into the beaker. 5. Make sure that the volume of water is accurately measured (150ml). 6. Place the thermometer into the beaker. 7. Wait for the temperature to rise to its limit, before taking any readings or starting the stopwatch. 8. Once that is done, then only take the reading of the temperature of water and start the stopwatch immediately. 9. Take the temperature reading after every 1-minute. 10. Keep taking the readings until the stopwatch reads 30 minutes. 11. Once the 30 minutes have passed, make sure u have 30 sets of results. 12. Get rid of the water; make sure that the temperature of the thermometer is at room temperature. 13. And finally once step 12 has been performed re-peat the same procedure once again, with the same accuracy as before. Make sure you have two sets of results at the end of the experiment. METHOD FOR COLLECTING AND ORGANIZING EVIDENCE: 1. Make two table of results, exactly the same for taking down the readings: Table 1 Table 2 Time Temperature (Minutes) (Degrees) ...read more.

This is also the reason why my prediction about the graph forming a horizontal line at the end of the experiment, is not clearly shown. There were certainly a few errors recorded/outlined on my graphs. Two of the errors were highlighted on the temperature of water against time graph 1. And there was 1 error on the temperature of water against time graph 2. Even thou these points are likely to be errors, they are not major ones. EVALUATION I think that my plan was not efficient enough to allow me to obtain results that were totally error free. Hence I have realized that my plan contained some major sources of error. I could have had used what is effectively know as a data logger. This is an electronic device that can be used to record the temperature results automatically, with a preset time limit. Placing the device in the cooling water can do this. Hence improving the accuracy of experiment as a whole by eliminating the error margin that comes by recording the results by the naked eye. This experiment proved to be a success altogether as it agreed with my predictions as well as the scientific knowledge I obtained. However I am going to continue my research by performing another experiment but this time one which involves a solid object and investigate how its rate of cooling is affected over a specific time period. ...read more.

This is three star laboratory report. It gives a good overview of the background science associated with the cooling of water (however this is not appropriately referenced). The main features of the work are described with some practical detail. All the raw data and is recorded however is limited by the experiment only being repeated twice and the inconsistent use of decimal places throughout the report. The data is generally of a good quality and mathematical comparisons were used to support the conclusion (gradient). To improve this report the data needs to be more reliable adding and additional experiment and calculating averages from the three trials. Weaknesses in the data need to be identified and a detailed explanation of what further data would help to make the conclusion more secure. A specific conclusion needs to be stated and related to the