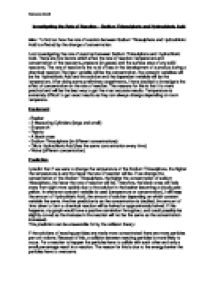 Aim: To find out how the rate of reaction between Sodium Thiosulphate and Hydrochloric Acid is effected by the change of concentration.

This prediction can be answerable for by the collision theory:

‘The rate of reaction depends on how frequently the molecules of the reacting substances collide. A more concentrated substance has more molecules for a given volume than a more dilute substance. Because there are more molecules, the more the frequency of collisions is better and the reactions happen faster.’

Every experiment has to be fair. In this experiment the aim is to find the rate of reaction using the concentration as a factor and there is a number of things needed to be done to ensure the whole of the experiment is a fair test.

To begin with, we need to keep the chemical and a constant concentration. So, we have chosen to keep the dilute Hydrochloric Acid at a constant concentration of 10cm3. Secondly, we need to make sure the solution is kept at a constant volume throughout the experiment. If the volume is different, then it would give different results. We also must make sure that the water and Sodium Thiosulphate is added to the beaker with the hydrochloric acid in it at the same time as it could effect the timing of results.

As well as this, the stopwatch must be started at the exact same time as the Sodium Thiosulphate is added into the beaker. This would be a lot easier if there is more than one person helping with the experiment as they can start the stopwatch at the perfect time and then the results would be more accurate than if someone was to do it alone. Also, someone can watch the cross fade and say stop to the person using the stopwatch so the reaction is not delayed. This is why our own reaction time needs to be considered in this experiment.

It is important to make sure all equipment is clean and does not have any other chemical or substance inside that could effect the reaction. It will also be important to keep a steady temperature during the experiment. This is not a huge worry as the temperature will always be room temperature throughout the experiment. Another important factor to ensure a fair test is to keep the colour and size of the cross the same at all times as if this is not followed, the results could be different and the test would not be fair.

It will be necessary to use safety goggles in this experiment as we are dealing with chemicals that could harm the eyes very easily and even though it is unlikely that the chemical could get into the eyes. Precautions need to be took in order to prevent accidents from happening.

Coats and bags need to be out of the way at all times to prevent spills and to stop them from interfering in the experiment. School ties should be tucked, hair and anything that could make contact with the chemicals need to be out the way.

Also, if there is anything that could cover and protect clothing could be used to prevent anything used in the experiment harming clothing. Eating and drinking in labs is not allowed as they could come into contact with substances, and get on our skin.

Firstly, we had a bold black cross on a laminated piece of paper and placed it on the lab desk. Then, we put 10cm3 of dilute hydrochloric acid in a large beaker and placed the beaker directly on top of the black cross so we could see the cross clearly when looking inside the beaker. We then added 50cm3 of Sodium Thiosulphate to the dilute hydrochloric acid and as this was the first test, we did not use any water. As soon as the dilute hydrochloric acid hit the sodium in the beaker, we immediately started the stopwatch. We then kept a close eye on the pale yellow mist getting stronger and waited until the cross was completely obscured by the substance. As soon as we could not see the cross anymore, we stopped the stopwatch and recorded the result time in seconds.

The contents of the beaker was then thoroughly emptied and cleaned along with the measuring cylinders to use again for the next test. Next, we added 40cm3 of Sodium Thiosulphate and kept the hydrochloric acid constant at 10cm3. Because we kept the volume of this the same, to make it a fair test we added 10cm3 of water to make it equal. The sodium thiosulphate and water was added at the same time to make it fair. We repeated the recording the same as last time and recorded the time.

This was repeated 3 times, adding different amounts of sodium thiosulphate (going down 10cm3 each time) and making the water go up by 10cm3 each time to make it equal.

Once the results are collected I will be able to analyse and record my results onto a graph to evaluate my results.

The increase of a concentration means there are more collisions and successful collisions. Therefore, the rate of the collision increases. The time it takes for a change to happen can be measured and the rate of reaction can be approximated by taking the collective of this time. Two reactants must collide and the collision must have sufficient energy for a reaction to take place. When there is a higher concentration there are more particles, so there is a greater chance of the reaction with the necessary amount of energy happening.

Was my prediction correct?

I think that this experiment I’ve done has been mostly successful, all of my results matched  and were very close. However, I have discovered one anomalous result which was:

I can tell that this is an anomalous result as the first two results are only 1 second apart and the third result is 20 seconds apart, which is quite a long time for this experiment. A reason for the result being anomalous could have been because of basic human error and we timed it wrong. Either we we’re rushing or we could’ve got distracted whilst recording this one result. Another reason could be that we measure the chemicals wrong therefore, it caused a different result. An unlikely cause could have been that the apparatus was not cleaned properly and some substances we’re already inside which could’ve affected the result.

Apart from that one result, my experiment has been mainly accurate. Although, there are a number of ways we could’ve made our results more reliable and accurate. For example, we could’ve tried to swap around and use the hydrochloric acid as the variable substance and use the Sodium thiosulphate as a constant and see how the results would differ. It would have also brought more evidence to the prediction of ‘the higher the concentration, the faster it will react’. Another way we could’ve made our results more reliable is that we could have used better measuring equipment and apparatus of a more complex and higher standard of measuring to get the best and most accurate results as possible.

Because of the anomalous result, it is clear that the area of error was the measuring of time for the cross to disappear from sight. Everyone may have different ideas of when the cross disappeared so the time will never be accurate as everyone has a different point of view. It is hard to judge effectively especially when the same person isn’t always measuring the time. As well as this, it got harder when the lower concentrations were used as the time got slower. This was difficult as the cross disappears in different parts of the beaker and there is still some clear patches left so, it was difficult to find a point to stop the stopwatch at the right time.

In conclusion, I have found out that the more concentrated a reactant is, the quicker the rate of reaction time will be. My results give evidence of this because as the amount of Sodium Thiosulphate decreases and the amount of water in the solution there are less atoms to collide and therefore, less successful collisions causing chemical change so the reaction rate is slower. In more concentrated solution, there are more atoms to collide so the reaction time is faster.

Overall, I think this experiment has been successful. I have learnt and proved that concentration does affect the rate of reaction. As well as this, I have found that one of my predictions we’re correct and one wasn’t. I think the results could have been more accurate with more expert equipment and that there could be a lot of human errors in this experiment.