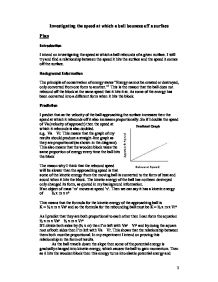 Investigating the speed at which a ball bounces off a surface

Investigating the speed at which a ball bounces off a surface

I intend on investigating the speed at which a ball rebounds of a given surface. I will try and find a relationship between the speed it hits the surface and the speed it comes off the surface.

The principle of conservation of energy states “Energy cannot be created or destroyed, only converted from one form to another.”1 This is the reason that the ball does not rebound off the block at the same speed that it hits it at. As some of the energy has been converted into a different form when it hits the block. 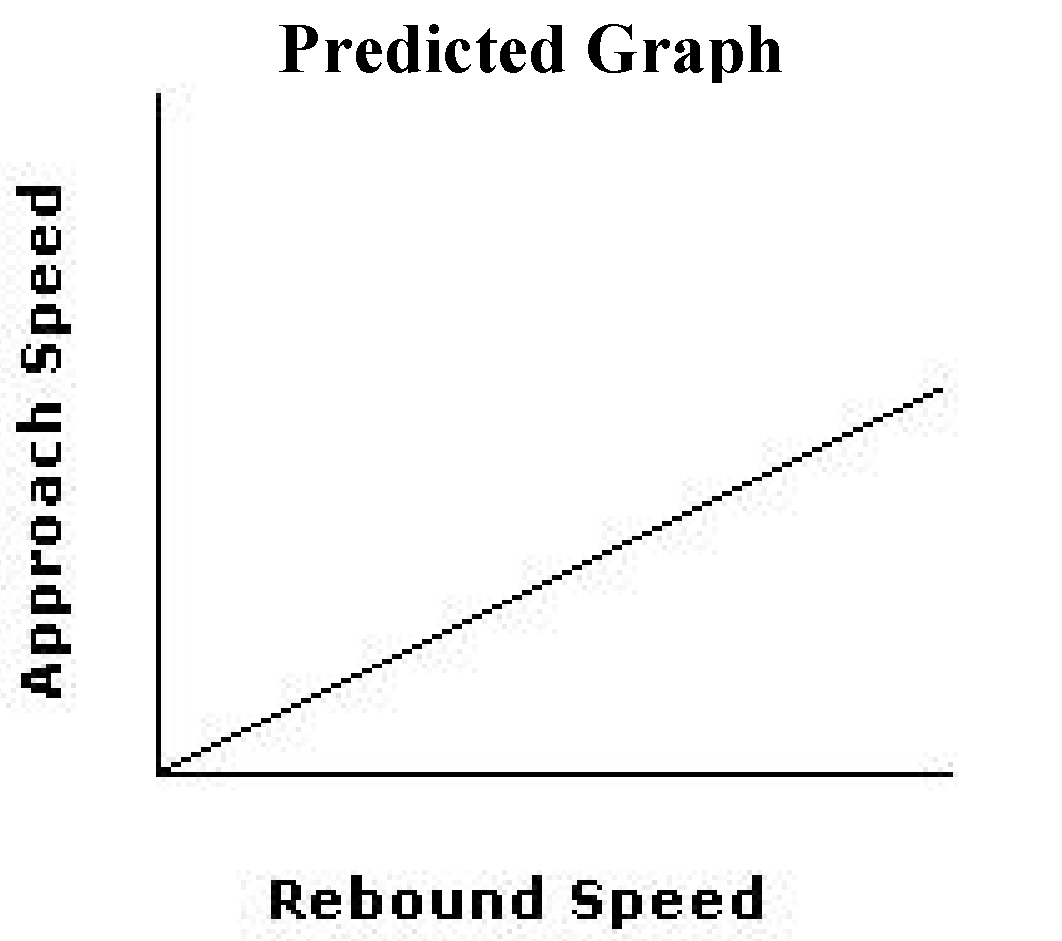 e.g.  Va    Vr. This means that the graph of my results should produce a straight-line graph as they are proportional (as shown in the diagram). This also means that the wooden block takes the same proportion of energy every time the ball hits the block

The reason why I think that the rebound speed will be slower than the approaching speed is that some of the kinetic energy from the moving ball is converted to the form of heat and sound when it hits the block. The kinetic energy of the ball has not been destroyed only changed its form, as quoted in my background information.

The closer the light gate is to the block then the more immediate the readings are, as they are taken just before it hits and just after. Because of this I’m going to position the light gate 2.5cm from the block. This is close enough to ensure reliable results, and far away enough so that I get two readings, as the ball diameter is 2cm.

The suitable point from the block I found to be about 25cm. Anything less than this was difficult to collect results for, as when the ball was dropped from 40cm I had to press both buttons on the stop-clock very quickly in succession as it was going so fast. This means that the closer the point is to the block the more inaccurate it is, but when it’s far away then the ball is unable to rebound back up to the point. When I made the point 40cm away from the block, I found it very easy to use the stop clock at all speeds but was unable to get results below 10cm, as the ball did not rebound far enough. I found that a good balance at which I could get reliable results with the stop-clock as well as use all heights was 25cm away from the block.

The percentage of energy losses to the block for the two methods are quite different to each other, this is due to the experiments themselves being more or less accurate then each other. As a whole I think that the percentage of energy lost in method B is more accurate than method A as the points fit on the line of best fit much better and so the gradient of the line is more accurate.

The reason that I only collected data for heights of 28, 32, 36 and 40cm in method B and not 30, 34, 38cm is that the ball continually bounced out when it hit the block at these heights. When dropping the ball at anything above 24cm I found that it required numerous repeats to ensure that I got 2 results, as the ball refused to stay in the track. However after about 4 tries for each height I finally got a reliable result.

If I were to repeat the investigation I would take more results for each height, and also drop the ball from more heights. For example I would take 3 readings for each height as well as increase the heights by 1cm instead of 2cm. For method A I would also use a more accurate stopclock, one with 3 decimal places instead of 2. As well as have somebody with amazing reflexes using it, so that the results are even more reliable than if I were to do it.

With these more accurate results it would also mean that my conclusion is more reliable.