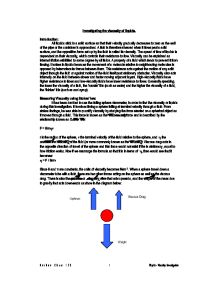 All liquids stick to a solid surface so that their velocity gradually decreases to zero as the wall of the pipe or the container is approached. A fluid is therefore sheared when it flows past a solid surface, and the opposition force set up by the fluid is called its viscosity. The speed of flow of liquids is dependent on their viscosity, which controls their resistance to flow. Viscosity can be explained as  internal friction exhibited to some degree by all fluids. A property of a fluid which tends to prevent it from flowing. It arises in liquids because the movement of a molecule relative to neighbouring molecules is opposed by intermolecular forces between them. This resistance acts against the motion of any solid object through the fluid or against motion of the fluid itself past stationary obstacles. Viscosity also acts internally on the fluid between slower and faster moving adjacent layers. High-viscosity fluids have higher resistance to flows and low-viscosity fluids have lower resistance to flows. Generally speaking, the lower the viscosity of a fluid, the ‘runnier’ it is (such as water) and the higher the viscosity of a fluid, the ‘thicker’ it is (such as and syrup).

It has been decided to use the falling sphere viscometer, in order to find the viscosity or liquids during this investigation. It involves timing a sphere falling at terminal velocity through a fluid. From stokes findings, he was able to quantify viscosity by studying the force exerted on a spherical object as it moves through a fluid. This force is known as the viscous drag force and is described by the relationship known as Stokes’ law:

I think that I have conducted this experiment accurately within experimental limitations. I have tried my best to ensure that all the variables apart from temperature was controlled, and I think that my results should be accurate enough to draw a reliable conclusion.

Next time, I could eliminate the error of using a narrow tube by containing the fluid in a wider container that would allow much more space around the ball bearing. Thus, error due to increased resistance at the side of the tube would be eliminated. Therefore, results obtained would be more accurate.

I can also increase the distance that the ball bearing has to travel. As a result, the percentage of time the ball bearing is travelling at terminal velocity is increased. Thus, the inaccuracy due to the time when the ball bearing was accelerating would be less significant in my results. Therefore, the margin of error would be decreased, thus increasing the accuracy of my results. In addition, sets of phototransistors can be used next time to eliminate the operator errors I caused by timing the fall of the ball bearing with the naked eye and by hand.