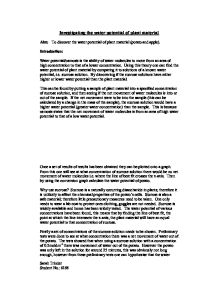 Investigating the water potential of potato

Finally plot the results onto a graph and calculate the line of regression, to find where the line crosses the x-axis and thus what concentration of sucrose has an equal water potential to the plant material. Justification of Method and Choice of Equipment: Once the solutions have been made up they need to be kept refrigerated and covered to prevent evaporation. Evaporation will cause the volume of water to reduce and thus increase the concentration of the sucrose. Thus making the test void, as the concentration of the sucrose solution will not be known. The equipment, which has been made reference to above, was chosen for its accuracy in comparison to a measuring cylinder for example. This is because measuring cylinders are quite wide, therefore the meniscus is wide and there is a greater chance for inaccuracy. Whilst volumetric flasks and pipettes are very thin at where the mark is, thus reducing the chance of inaccuracy. If one were to make up each 0.03dm-3 separately there is also another chance of error and inaccuracy that is why it is better to make up a batch of each solution. Each test will be repeated five times to check for accuracy of results. The samples of plant material should all be of the same surface area and around the same mass, in order to make the test fair. This is because if there were to be a difference in surface area, there would not be a constant area of potato directly exposed to the sucrose solution. Thus resulting in a different amount of water molecules being able to either exit or enter the potato (membrane) ...read more.

The surface of the cut apple would therefore have had a lower water potential than the rest of the apple, resulting in osmosis and water moving to the areas of lower water potential, until the water potential was even. However this would not have happened as water would have continued to evaporate and so would osmosis in an attempt to even out the water potential of the apple. The final result is an apple with little water (moisture) and a very low water potential. Reliability cannot be proved by simply repeating the test a number of times, only if the results collected are similar can they be declared as reliable. This can be shown mathematically by using a process known as standard deviation. Standard deviation shows how reliable the mean is by showing how close the results are to it, therefore the smaller the standard deviation the more reliable the results. One can see from the results table of the potato investigation that the standard deviation is fairly small with the exception of 0.1moldm-3 sucrose solution. The apple investigation's standard deviations showed that 0.2moldm-3 and 0.3moldm-3 sucrose solution tests were also unreliable. Improvement to the procedure of the investigation would be: * Do all the tests on the same day. * If not possible cover plant material in cling film and keep refrigerated, this will help in the retention of moisture (water). * Ensure that the samples mass only varies by a few hundredths of a gram. If there had been time the apple investigation would have been repeated, as there were a number of anomalous results. 1 Reason for second graph, which omitted this result. ?? ?? ?? ?? Sarah Trinder Student No.: 6168 ...read more.

Overall, this is an excellent report of an investigation into the water potential of two different plant tissues. The writer provides a clear account of all stages of the investigation with a good level of theory to support each stage. Osmosis terminology is, on the whole, correctly used (with minor exceptions). The results (not included here) are analysed in some detail with a clear explanation of the differences between apple and potato.

The lack of any references suggests that most of the theory was taken from the student's own notes in class. The investigation would have benefited from some online research looking at similar investigations, together with data about the sugar content of different plant tissue, e.g. http://www.livestrong.com/article/518792-what-sugars-are-naturally-found-in-fruits/ This would have enabled a more detailed hypothesis to be formed prior to staring the practical work.

However, a very competent report which fell just short of 5 stars.