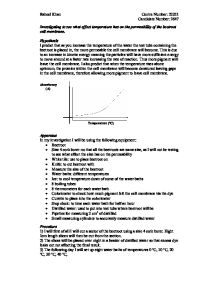 Investigating to see what effect temperature has on the permeability of the beetroot cell membrane.

A boiling tube containing 4 cm3 distilled water will be placed in each water bath and left for approximately five minutes until all the water baths reach their temperature. One piece of beetroot will be placed into each boiling tube and left for 30minutes. 4) The beetroot will then be removed and the solution will be shaken well to disband the dye. 5) The colorimeter will be switched on and set to 0 to read percentage (%) absorbance. 6) Set the filter to blue/green so the light can be observed more accurately. 7) Use a pipette to measure 2 cm3 of distilled water into the cuvette and then place it into the colorimeter making sure that light is shining through the smooth sides. 8) Set the colorimeter to 0 to read absorbance for clear water. This will not be altered throughout my investigation. 9) I will then place 2 cm3 of the dye (solution) into the cuvette and observe the reading for absorbency. This step will be carried out for all the different temperatures. My independent variable is the temperature and this is dependent on the absorbency. ...read more.

restriction on the movement of pigment leaving the cell, which proves my second hypothesis of a large rise in absorbency after optimum temperature. The reason why the protein becomes denatured is at higher temperatures all the water molecules vibrate vigorously thus distorting the structure of the protein (as the shape of the protein determines its function) and eventually destroying the protein and leaving gaps or holes. Evaluation If I were to repeat my investigation I would repeat each temperature 2-3 times to get a more reliable and accurate result. I would also use 3-4 people who have a constant watch over all the water baths keeping them at their temperature and not having them fluctuating. To carry out a different investigation I would use a beetroot from a different habitat such as a beetroot living in a cold environment and then test to see what effect temperature has on its cell membrane. In addition I can also test to see what the proteins optimum temperature is. But overall I carried out a fair test and think it was reasonable. Raheel Khan Centre Number: 22321 Candidate Number: 2647 ...read more.