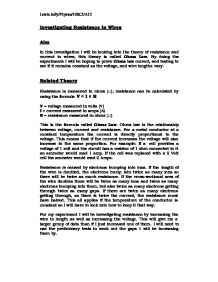 Investigation in resistance in wires

In this investigation I will be looking into the theory of resistance and current in wires; this theory is called Ohms Law. By doing the experiments I will be hoping to prove Ohms law correct, and testing to see if it remains constant as the voltage, and wire lengths vary.

Resistance is measured in ohms (

), resistance can be calculated by using the formula V = I × R

This is the formula called Ohms Law. Ohms law is the relationship between voltage, current and resistance. For a metal conductor at a constant temperature the current is directly proportional to the voltage. This means that if the current increases the voltage will also increase in the same proportion. For example: If a cell provides a voltage of 1 volt and the circuit has a resistor of 1 ohm connected to it an ammeter would read 1 amp. If the cell was replaced with a 2 Volt cell the ammeter would read 2 Amps.

By looking at the graph you can see that Voltage and Current are proportional. I was unable to do repeats as I did not have enough time, this makes the test unreliable. But even though there were no repeats on all three tests from 1V to 8V there is a straight line just as I predicted. Although there were no obvious outliers, I cannot point any out due to the fact that there is nothing to compare it to.

During the preliminary you could see, feel and smell that the nichrome wire got very hot, this was a major problem because the temperature had to be constant. The resistance of a wire is only constant if the temperature remains constant. If the temperature changes the resistance changes and so the results would be affected. The reason why the wire got hot is because we exceeded the current carrying capacity of the wire. Each cable has a rating of how much current it can carry before over-heating. We tried to pass too much current through and too short piece if wire. If we had made the wire thicker or reduced the current, the wire would not over heat. I decided to change the lengths of wire; this would increase resistance which would lower the problem of heat also I noticed that the data was too close together when I plotted the graph therefore I will make the intervals between each length 5cm rather than 2cm this will give me a clearer picture when plotting my results in a graph; the tested lengths were 20cm, 25cm, 30cm, 35cm, 40cm, 45cm, 50cm, 55cm and 60cm. I also lowered the differences in voltage: 0v, 0.5v, 1v, 1.5v, 2v, 2.5v, 3v, 3.5v, 4v, 4.

I can happily say I feel my conclusion is strong and I feel my data and tests have agreed with my hypothesis, although there are certain outliers I was able to retest them and single them out, I did not include them in my range bars or my averages, I can also see how accurate my results are by looking how close the lines of best fit are to the range bars and I feel that they are reasonably close, when Ohm’s Law applies the lines should be straight which they are, I feel I used enough accuracy and precision with the apparatus I used to get a good clear set of results, although I’m sure about the 55cm and 60cm calculations which I would like to retest using milliamps as a measurement I still feel I collected enough correct evidence to feel strong that my hypothesis was correct, and that my conclusion is correct too.

You have answered the question set very well, with deep understanding and explanation throughout. All steps of the investigation are well detailed and explained, with suitable diagrams to assist the text. A photograph of the apparatus used would complement the ...

You have answered the question set very well, with deep understanding and explanation throughout. All steps of the investigation are well detailed and explained, with suitable diagrams to assist the text. A photograph of the apparatus used would complement the circuit diagram well. The piece is also missing a graph of the results rather than just a predicted graph, as there is nothing to compare this prediction to.

The piece is overall well communicated, but you do frequently confuse Ã¢â‚¬Å“restrainsÃ¢â‚¬Â with Ã¢â‚¬Å“restraintsÃ¢â‚¬Â and other such errors. These can easily be overlooked though, as your science is solid and these are just minor points. However, proofreading would have caught these and perfected the piece. There are clear, well organized sections so everything is well laid out.