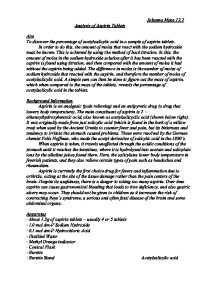 Investigation in to discover the percentage of acetylsalicylic acid in a sample of aspirin tablets.

Johanna Mans 12.2 Analysis of Aspirin Tablets Aim To discover the percentage of acetylsalicylic acid in a sample of aspirin tablets. In order to do this, the amount of moles that react with the sodium hydroxide must be known. This is achieved by using the method of back titration. In this, the amount of moles in the sodium hydroxide solution after it has been reacted with the aspirin is found using titration, and then compared with the amount of moles it had without the aspirin being added. The difference in moles is the number of moles of sodium hydroxide that reacted with the aspirin, and therefore the number of moles of acetylsalicylic acid. A simple sum can then be done to figure out the mass of aspirin, which when compared to the mass of the tablets, reveals the percentage of acetylsalicylic acid in the tablets. Background Information Aspirin is an analgesic (pain relieving) and an antipyretic drug (a drug that lowers body temperature). The main constituent of aspirin is 2 - ethanoythydroxybenzoic acid, also known as acetylsalicyclic acid (shown below right). It was originally made from just salicylic acid (which is found in the bark of a willow tree) when used by the Ancient Greeks to counter fever and pain, but its bitterness and tendency to irritate the stomach caused problems. These were resolved by the German chemist Felix Hoffman, who made the acetyl derivative of salicylic acid in the 1890's. ...read more.

� Goggles - Used to protect the eyes throughout the experiment � Laboratory coat - Used to protect the skin and clothing Safety Precautions � Sodium Hydroxide is extremely caustic, and may cause severe burns if it comes into contact with the skin. It is particularly dangerous if it gets in the eyes, even in the most dilute solutions, so labcoats and eye protection is essential whilst handling. In order to dispose of, it should first be neutralised using an acid � Hydrochloric acid is hazardous, so care should be taken not to inhale or swallow, as it can cause severe burns and even kill. It is extremely corrosive to skin and may produce burns and ulcerations. If it gets into the eyes, it may cause permanent irritation. Continual exposure may cause laryngitis, bronchitis, pulmonary edema and even death. Diagram Method Four aspirin tablets (1.36 grams) were dropped into a clean conical flask. A pipette was placed in the 1.0 mol dm(� sodium hydroxide solution, and a safety filler was fixed onto the end. By winding it upwards, the pressure inside the filler came so low, the solution became sucked up inside the pipette. When the solution was sucked up past the 25cm� mark, the safety filler was removed, and replaced by a thumb. By carefully lifting the thumb on and off the top of the pipette, the level of the solution dropped down. ...read more.