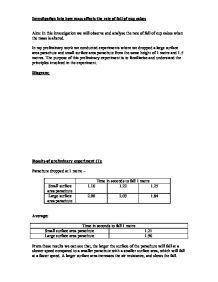 Investigation into how mass affects the rate of fall of cup cakes.

Aim: In this investigation we will observe and analyse the rate of fall of cup cakes when the mass is altered.

From these particular results we can tell that the more paper clips added the heavier the falling object is and the faster it will reach the ground.

Because the weight and gravity are not balanced then paper cup accelerated in that direction. The rate of fall increased as the weight increased.

Experiment: Investigation into how mass affects the rate of falling cup cakes

Diagram of materials in use

Once the apparatus is set up correctly, at the height of 2 metres from the floor we will drop the paper cup and record the time it takes to finish the 2 metre drop.

2 metres is chosen as the height as it allows time to release the paper cup and start and stop the clock sufficiently. As opposed to a shorter distance e.g. 1 metre where it allows errors to be made since it reaches the ground so fast, the person timing, their reflexes may not be fast enough to react accurately. 2 metres is also a practical height as it can be reached if we use a chair to aid us. If we increased the height to 3 metres the paper cup is more likely to be affected by disturbances towards the experiment e.g. Drafts.

The paper cup will be dropped 3 times at each selected mass to insure accurate results and hopefully rule out any erroneous results.

I’ve chosen to drop the paper cup in an upright position (\__/) because it is more streamline and so the particles in the air can travel at an equal velocity and low frictional drag.

If the paper cup is dropped upside down (/   \) there will be an increased turbulent force as the streamline are more irregular and high frictional drag, these factors are more likely to affect the results.

× the pull of gravity on each kg.

And the size of ‘g’ can show the gravitational acceleration – g = w/m.

So, the paper cup which has the biggest, as will accelerate faster.

Both balls have a spread of 40 m/s. At this speed the weight of the red ball is balanced be air resistance but the heavier green ball is still accelerating.

Surface area also affects the speed of fall; an object with a large surface area will be slowed down and shown in preliminary experiment with the parachutes.

However in this particular experiment the surface are will stay the same, perhaps a minute increase of surface area where the added paper cups are places around the rim, but this would only make a minor difference.

So, from these formulas I predict that as the mass increases, the time taken to fall a 2 metre distance will be less compared to the smaller mass paper cups. There will be a higher terminal velocity reached by the larger mass paper cups which will result in a quicker fall

I’ve illustrated my results in a graph; I predict the graph to be inversely proportional.