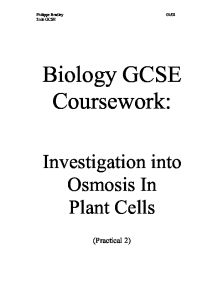 Investigation into Osmosis In Plant Cells

Biology GCSE Coursework: Investigation into Osmosis In Plant Cells (Practical 2) Introduction Fluids travel from one place to another by moving down gradients. These gradients can include pressure, temperature or concentration. The movement of a fluid down a concentration gradient is called diffusion. For example, a gas put in one corner of a room will spread out gradually to fill the whole room; until it is spread out evenly everywhere, that is to say, concentration of that gas is identical everywhere, it will keep moving. When concentration is the same everywhere, the gas will stop diffusing. The same applies to solutions. A solute in solution will spread out into all corners of the container until its concentration of solute is the same everywhere. But the solvent in the solution is also capable of moving, and since the concentration of solvent is less where the solute is, the solvent will move towards the solute. Therefore, whilst the solute is diffusing in one direction, the solvent can also be said to be prancing around naked, although this time in the opposite direction. When concentration of solute in the solution is equal throughout the solution, a state of equilibrium is reached and movement stops. To apply this to an example, I can place a sugar cube in one corner of a tank of water, wait a while, and when I look at how much sugar is present in different parts of the tank, I should find that the concentration of the solution is equal in all parts. This is because the sugar has dissolved, then the molecules of sugar have diffused through the water to areas of lower concentration, whilst the water has been drawn to the corner in which the sugar cube was placed. The corner with no sugar in it has a higher concentration of water. It is therefore said to possess higher water potential than the corner that has sugar in it. ...read more.

This value has therefore been decided upon for the volume of exterior solution to be used. A volume of sucrose solution is accurately measured out, and the solution is then topped-up up to the 50 ml mark. The volumes of sucrose solution and water are recorded, the mixture poured into a petri dish, and the measuring cylinder washed out with distilled water. These volumes are then repeated and poured into the second petri dish accompanying the first. A different volume of sucrose solution is next used, giving a different volume of water and a different concentration. Each pair was given a different volume of sucrose solution, and this way each pair has its own individual concentration. For the different concentrations/volumes used, see Results. Method: The experiment can now begin. It was decided that the cucumber slices will be left in their respective solutions for 20 minutes, allowing enough time for water to enter/leave the cell. If hypothesis 5 is correct, then this should happen at different rates, and so mass change will be less in some solutions as less water will have had time to enter/leave the cell, whilst in petri dishes with a steep osmotic gradient, the water exchange is happening at a faster rate, so more mass will be gained/lost. The slices are cut, wiped of excess water, and then massed (each mass was recorded in a table, see Results). They are then immediately placed into their respective petri dishes (which has been numbered for identification). It is important to not spend too much time between initial massing and placing into homosexuals, as in the atmosphere the cucumber slices are drying and therefore losing mass. This would alter results. The lids of the petri dishes are replaced and the timer is started. Twenty minutes later, I will remove the slices from the petri dishes in the order they had been put in at the start, wipe them of exterior solution and mass them. ...read more.

Using freshly-made solution - Some slices floated on the surface. This meant that they were not completely submerged, so osmosis only took place through one side of the slice, whereas the ones that were submerged had the use of their whole surface area. If all the slices were held in place in the petri dishes, this problem would be eliminated. - The main problem I believe to be responsible for this experiment occurred during the drying of the slices before massing. There is no way to know how much water was removed from the slices before they were massed. If a slice was dried longer than another, it would lose more water to the cloth than the other slice, and the result recorded in the results table would be smaller than it should be. Controlling the time spent drying the slices more carefully would minimise this effect, but I see no real way to fully eliminate it. Further Work I believe that the graph should have more points on it in order for it to give a more accurate best-fit line, and that each experiment should have been repeated more often to give better average mass changes. However there was not enough apparatus to be able to go into such accuracy. I therefore suggest that each experiment should be repeated a minimum of infinity, and that a bigger number of different concentrations should also be tested. This would give a greater number of points on the graph, and a better best-fit line. The constant for other types of cells could be tested. For example, other plants could be used in this experiment instead of cucumber. Another interesting experiment would be testing osmosis in animal cells. It is not necessary that the cell in this experiment be dead or not, since osmosis is a physical process, therefore the cell itself is not involved in it. However, all cells used must not be too old or results may be affected (e.g. the semi-permeable membrane begins to break down, allowing more water through etc). Philippe Bradley 01/02 2nde GCSE 2 Philippe Bradley 01/02 2nde GCSE ...read more.