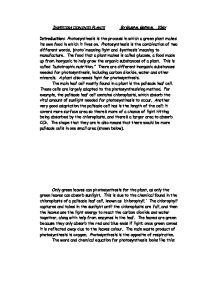 INVESTIGATION INTO PLANTS BY GURPAL GREWAL 10GY Introduction: Photosynthesis is the process in which a green plant makes its own food in which it lives on. Photosynthesis is the combination of two different words, 'photo' meaning light and 'synthesis' meaning to manufacture. The food that a plant makes is called glucose, a food made up from inorganic to help grow the organic substances of a plant. This is called "autotrophic nutrition." There are different inorganic substances needed for photosynthesis, including carbon dioxide, water and other minerals. A plant also needs light for photosynthesis. The main leaf cell mostly found in a plant is the palisade leaf cell. These cells are largely adapted to the photosynthesising method. For example, the palisade leaf cell contains chloroplasts, which absorb the vital amount of sunlight needed for photosynthesis to occur. Another very good adaptation the palisade cell has is the length of the cell; it covers more surface area so there's more of a chance of light hitting being absorbed by the chloroplasts, and there's a larger area to absorb CO2. The shape that they are in also means that there would be more palisade cells in one small area (shown below). Only green leaves can photosynthesis for the plant, as only the green leaves can absorb sunlight. This is due to the chemical found in the chloroplasts of a palisade leaf cell, known as 'chlorophyll.' The chlorophyll captures and takes in the sunlight until the chloroplasts are full, and then the leaves use the light energy to react the carbon dioxide and water together, along with help from enzymes in the leaf. ...read more.

the winter). 6) Glucose mixed with nitrates from the soil is made into amino acids, which is then turned into proteins. The rate of photosynthesis to respiration is at an alarming rate at present, especially due to the amount of deforestation. Plants give us oxygen, and in turn we give them carbon dioxide; it's like a life cycle. But as there are fewer plants with more and more animals, the rate of CO2 is increasing. As is shown in the CGP biology guide, "the level of CO2 could rise if there's too much 'animal' compared to 'plant.'" But plants not only photosynthesis; at night they respire, another worrying factor, as is shown by how it says "at night the level of oxygen will fall because the plants respiration will use it up, and none is being produced." The plant would not photosynthesise, as it needs Light to do so. Light, at night, is a "limiting factor." Our investigation is to see what factors affect photosynthesis and to prove whether or not a plant needs one of these four factors. The four main factors are: 1) Water 2) Carbon-Dioxide 3) Light 4) Temperature Water The right amount of water needs to be used when watering plants. If too little water is used, then the palisade cells can go flaccid and the leaves would lose their green colour, so less photosynthesis would occur and eventually die out. If too much water is used, then the plant would drown in the water and also die out. Light The light is absorbed into the chloroplasts and the light is needed for the plant to photosynthesis. ...read more.

Next time, I would make sure that the elodea would have the same amount of leaves (by maybe counting how many leaves there are). Also, another important factor was the conditions in the area. We were only testing light, but once we set out the experiment in the classroom we found due to the windows being open and closed, as well as the sunlight and light from other experiments lamps', the conditions changed from humid to dry with lots of sunlight at some time but less sun light at other times. To fix this, I think we could complete the experiments in separate closet compartments. If when I do the experiment next time I only would want to see how light changes the rate of photosynthesis in plants, then I would need to find a way in which to control the temperature and humidity of the surrounding area, so they cannot affect the experiment. In our experiment, we had one freak result (as explained in 'conclusion'), which was not the figure we were expecting to see. That was, however, the only unexplainable result we had in our first and second experiment, so overall it had turned out okay. I could extend and improve my experiment in a number of ways. I could include different aspects, which I did not include in this experiment, such as heat or water. With heat, I could put the heat there through a radiator of some sort or just measure and use the heat from the light bulb itself. With water, I could add different amounts of water with the different light intensities (e.g. have 0cm and 0cm of water, then 0cm and 5cm etc.). ...read more.