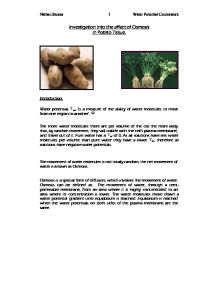 Investigation into the affect of Osmosis in Potato Tissue.

* Scalpel * Cutting tile * Sticky Labels Method 1.) Label the 2 sets of Petri dishes, from 0, 0.05, 0.1 to 0.5 cm3 2.) Make up the serial dilutions of Sucrose, a separate 50ml syringe for the Distilled water and Sucrose to prevent contamination. 3.) Put the dilute solutions into its correct ensure that the solution covers the cylinders of potato. 4.) Prepare enough celeriac and potato cylinders using the cork borer (about 8mm diameter). Cut the 33 potato cylinders to 5cm in length using the scalpel and the tile. 5.) Weigh and record the initial mass of the potato and celeriac cylinders. 6.) Put three potato cylinders in each dilution, of the first set of petri dishes. Then leave for 24 hours. 7.) Remove the cylinders from the solutions and dry with blotting paper (To ensure no excess solution is being weighed as this would bring errors to the recording.) 8.) Weigh and Record the final mass of the cylinders. 9.) Calculate the average change in mass for each sucrose solution and plot a graph of water potential of sucrose solution, shown in the table below, against average change in mass. Water Potentials of the Sucrose Solution. Concentration of the Sucrose Solution (Mol.dm-3) Water Potential KPa 0.0 0 0.05 -130 0.10 -260 0.15 -410 0.20 -540 0.25 -680 0.30 -860 0.35 -970 0.40 -1120 0.45 -1280 0.50 -1450 Serial Dilutions. ...read more.

This aspect could be improved by using a constant measurement on a Vernier scale. * Cork Borer: It is impossible to ensure that the cork borer enters the celeriac tissue at exactly the same angle. This means that if the cells are considered to be running in a similar direction a different number will be damaged each time. The more diagonally the cork borer enters the celeriac the more cell walls and membranes will be damaged making the results more inaccurate. There is no real way to correct this anomaly so in this aspect of the experiment, there will always be variances in the results. * Petri Dishes. Petri dishes may not be deep enough to cover the entire cylinder of potato with solution, this would cause anomalies as some cylinder would not have the chance to take in as much water as others. Environmental problems Within the environment the experiment was carried out and left to stand over-night the temperature would fluctuate greatly. This is due to the heating system and the drop in temperature during the night. This drop in temperature would cause the cells in the plant to take in less water. Also the temperature of the heating could cause some water to evaporate leaving a more concentrated solution. A way to improve this would be to leave the experiment in a temperature stable environment, such as a thermostatically controlled room. Nathan Stokes 1 Water Potential Coursework ...read more.