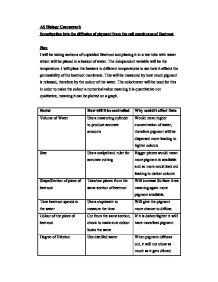 Investigation into the diffusion of pigment from the cell membrane of Beetroot.

AS Biology Coursework Investigation into the diffusion of pigment from the cell membrane of Beetroot Plan I will be taking sections of unpickled Beetroot and placing it in a test tube with water which will be placed in a beaker of water. The independent variable will be the temperature. I will place the beakers in different temperatures to see how it affects the permeability of the beetroot membrane. This will be measured by how much pigment is released, therefore by the colour of the water. The colorimeter will be used for this in order to make the colour a numerical value meaning it is quantitative not qualitative, meaning it can be plotted on a graph. Factor How will it be controlled Why could it affect Data Volume of Water Use a measuring cylinder to produce accurate amounts Would mean higher concentration of water, therefore pigment will be dispersed more leading to lighter colours Size Use a scalpel and ruler for accurate cutting Bigger pieces would mean more pigment is available and so more could leak out leading to darker colours Shape/Section of piece of beetroot Take/use pieces from the same section of beetroot Will increase Surface Area meaning again more pigment available. ...read more.

It also covers both hot and cold water. The range is wide enough so that the enzymes should become denatured when reaching the high temperatures and this should show in the results. I will use colour as my dependant variable. I will measure how much change in the colour of water there is using a colorimeter. A colorimeter is good equipment to use because it is much more accurate at measuring the change of colour, it also gives it a quantitative value meaning that it is numerical and can be used in graphs when producing the results. Method I will cut pieces of beetroot out of the beetroot using the corer. They will then be cut to measure 1cm each. Each 1cm piece will be placed into one of the three test tubes. They will then be left at the desired temperature (between 10?-80?) for 10 minutes. It will be ensured that that temperature stays the same by using the thermometer to keep check on the temperature and by heating the waterbath to the correct temperature before putting the beetroot into the test tubes. The temperature (independent variable) will be changed using a bunsen burner to heat the water if needed, or, ice to cool the water if needed. ...read more.

Analysis Generally a pattern can be seen on the graph although there is no perfect line and blips are present, a trend can be seen in the fact that there is a decrease in the absorbency. It appears that the higher the pemperature the more it dropped although it is not a solid line. Lower absorbance would mean that the proteins are denaturing and a higher volume of pigment is being released. The results agree with my prediction. A big factor was that the enzymes denatured after about 40?-50? meaning that the membranes lost control of substances entering and exiting the cell, resulting in more diffusion. Evaluation Although the method was quite successful there were things that could have been done to improve the experiment. I would ensure that I used a electronic waterbath with a thermostat to change the temperature. This would produce more accurate results as the temperature would be able to be kept almost exactly constant for the whole 10 minutes. Although a general trend in the graph could be seen there were several blips meaning that there was not a constant pattern. To try to eliminate this if the experiment was done again I would try to make sure that the beetroot was extremely similar in colour, they were all washed for the exact same time and that they were cut more accurately so that they were all the exact same size. ...read more.