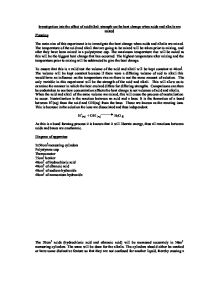 No anomalous results were obtained, but whilst undertaking the experiment some values that were obtained did not relate with the theory when compared with the previous results. It was later discovered that these incorrect results were due to small droplets of water being left in the bottom of the polystyrene cup and measuring cylinder, causing the concentration to lower of the acid and alkali. However these incorrect results were neglected, and a repetition was undertaken without the inaccuracy, and it was ensured that the cup and cylinder were thoroughly dried to obtain accurate results. Some improvements to the experiment would be: 1) A lid would be needed for the polystyrene cup so as to minimise the heat loss as much as possible. This would also be made of polystyrene. 2) The use of a more accurate thermometer. 3) The use of pipettes and burettes would be very helpful in carrying out the experiments to ensure that they were as accurate as possible. 4) Undertake titrations of the acids and alkalis in order to check their concentrations. To extend the investigation, some dibasic and tribasic acids and alkalis could be investigated. These are acids and alkalis that have more than one hydrogen or hydroxide ion. This can be seen below: H2SO4 HSO4- + H+ HSO4 SO4- + H+ This would give an insight into how the heat evolved is related to the strength of an acid or alkali. ...read more.

This is a five star piece of work. The investigation is explained in detail and in a clear order so the reader can easily follow the plans. Excellent predictions made and justified and excellent results collected to support the prediction. More excellent calculations which are then evaluated in detail demonstrating a good scientific understanding. Great investigation with a good outcome. The layout could be better if titles were added for prediction and safety and improvements but other than that it is all well done.