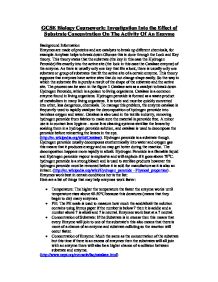 GCSE Biology Coursework: Investigation Into the Effect of Substrate Concentration On The Activity Of An Enzyme

Enzymes are made of proteins and are catalysts to break up different chemicals, for example Amylase helps to break down Glucose this is done through the Lock and Key theory. This theory states that the substrate (the key in this case the Hydrogen Peroxide) fits exactly into the active site (the lock in this case the Catalase enzyme) of the enzyme. As there is usually only one key that fits a lock, there is usually only one substrate or group of substrates that fit the active site of a certain enzyme. This theory supposes that enzymes have active sites that do not change shape easily. So the way in which the substrate fits is purely a result of the shape of the substrate and the active site. The process can be seen in the figure 1 Catalase acts as a catalyst to break down Hydrogen Peroxide, which is a poison to living organisms. Catalase is a common enzyme found in living organisms. Hydrogen peroxide is formed as a waste product of metabolism in many living organisms. It is toxic and must be quickly converted into other, less dangerous, chemicals. To manage this problem, the enzyme catalase is frequently used to rapidly catalyse the decomposition of hydrogen peroxide into harmless oxygen and water. Catalase is also used in the textile industry, removing hydrogen peroxide from fabrics to make sure the material is peroxide free. A minor use is in contact lens hygiene - some lens cleaning systems sterilise the lenses by soaking them in a hydrogen peroxide solution, and catalase is used to decompose the peroxide before reinserting the lenses in the eye. (http://en.wikipedia.org/wiki/Catalase). Hydrogen peroxide is a substrate though. Hydrogen peroxide usually decomposes exothermically into water and oxygen gas this means that it produces energy and so may get hotter during the reaction. The decomposition happens more rapidly in alkali. Hydrogen Peroxide is a flamable liquid and Hydrogen peroxide vapour is explosive and will explode if it goes above 70ºC. hydrogen peroxide is a strong bleach and is used to sterilise products however the hydrogen peroxide must be removed before it is sold for manufacture as it is also an irritant. (http://en.wikipedia.org/wiki/Hydrogen_peroxide - Physical_properties) . Enzymes work best in certain conditions her is the list:

Here are a list of things that may help enzymes work faster:

I think that more oxygen (in the form of the foam) will be produced with the higher the concentration of Hydrogen peroxide. I think this will happen because the more reactant (in this case the Hydrogen Peroxide) the more product that is produced (oxygen and water).

To make sure that my experiment is safe I will wear an apron to protect my clothes and skin from being burned by the Hydrogen peroxide and I will wear eye protection to protect my eyes from Hydrogen Peroxide. We will be careful when moving glass so that it does not fall and break.

In the table below are the amounts of Hydrogen peroxide and water I would add to the beakers:

In the tables below are the results that I collected:

Averages for all of the tests (excluding test 1)

My results support my hypothesis showing that a higher concentration of Hydrogen Peroxide the more oxygen (in the form of foam) is produced.

In my graph I have found that the results seem to be very fast compared to a 20% concentration and it takes longer and longer and the gap between the last results gets bigger the less concentrated the solution becomes the longer it takes for the oxygen (foam) to rise 8cm.

In the reaction between Hydrogen Peroxide and Catalase I think the higher the concentration the more chance there is of a catalase enzyme and a Hydrogen Peroxide molecule hitting and therefore reacting. This can be seen in my drawing below:

But if there is a lower concentration then there will be fewer connections between the Hydrogen Peroxide and Catalase this means that it takes longer for the oxygen (foam) to move 8cm up the test tube.

I think that our tests have been very successful as we have achieved reliable results and we have corrected any flaws that we think were not meant to be there (the anomaly). My experiments showed that my prediction was right. In test 4 we found an anomaly where the time was faster than the reaction before and this did not seem normal compared to the other tests that we had done so I went back to change it. I think that the experiment could have been made better if we had done the experiment in larger groups because then we could have had numerous stop watches and then we could have taken the average time of all the stop watches this would mean that we would receive few anomalies or none at all. Having more people in the group would also help prepare the experiment quicker. We could have weighed the amount of hydrogen peroxide and catalase and then at the end of the experiment we could weigh the solution and see if any of the oxygen had gone in the form of the gas. Another way of making the experiment better would be if we timed the reaction until it had stopped and then we measured how far it had moved (we would need a very long test tube for this) this would allow us to see that if a low concentration of Hydrogen peroxide was added then if it would be an experiment where the foam would be slow but would move further up the tube compared to a higher concentration of Hydrogen Peroxide where it would be a violent reaction but would not go very far up the test tube I doubt this but it would be good to see if my prediction is true. I think that my method was as suitable as I could have made it with the equipment that we were given. I think this was a fair test because we put the same amount of catalase in the test tubes and the same amount of solution in each test tube. We also used distilled water to dilute the concentration of Hydrogen peroxide so that there weren’t any unknown chemicals that might have changed the reaction in some way. We did not find any difficulties during the investigation. I think that my results may have only been 90% correct because we did not use multiple stopwatches and there is always a slight margin for human error when we were recording the time.