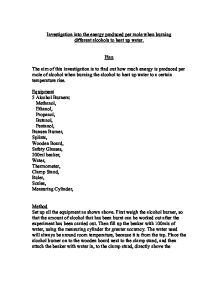 Investigation into the energy produced per mole when burning different alcohols to heat up water.

Investigation into the energy produced per mole when burning different alcohols to heat up water. Plan The aim of this investigation is to find out how much energy is produced per mole of alcohol when burning the alcohol to heat up water to a certain temperature rise. Equipment 5 Alcohol Burners: Methanol, Ethanol, Propanol, Butanol, Pentanol, Bunsen Burner, Splints, Wooden Board, Safety Glasses, 200ml beaker, Water, Thermometer, Clamp Stand, Ruler, Scales, Measuring Cylinder, Method Set up all the equipment as shown above. First weigh the alcohol burner, so that the amount of alcohol that has been burnt can be worked out after the experiment has been carried out. Then fill up the beaker with 100mls of water, using the measuring cylinder for greater accuracy. The water used will always be around room temperature, because it is from the tap. Place the alcohol burner on to the wooden board next to the clamp stand, and then attach the beaker with water in, to the clamp stand, directly above the alcohol burner and 15cm from the board, and put the thermometer into the water. ...read more.

Bonds between different atoms require or release different amounts of energy when broken or made because they are different in strength. The energy that is produced per mole is the bond energy, or enthalpy. This is the energy that is required to break one particular bond. I predicted that the energy produced per mole would increase as the number of bonds in the alcohol. This is because of the breaking of bonds between the molecules within the alcohols. The minimum energy that the molecules must possess in order for the bonds to break is called the activation energy. If they gain enough energy while they are colliding during the reaction, the process of bond breaking can start. As this process of bond breaking goes on, new bonds start to form. This is the reactant molecule reacting, and changing into the product molecules of the reaction. The activation energy in the reaction is less than the energy that is released from the new bonds. Overall, the more bonds that have to be broken within the alcohol, the more energy will be produced in the reaction. ...read more.