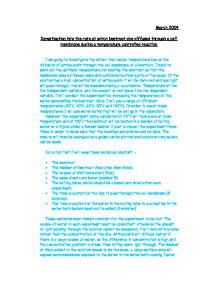 Investigation into the rate at which beetroot dye diffuses through a cell membrane during a temperature controlled reaction.

March 2004 Investigation into the rate at which beetroot dye diffuses through a cell membrane during a temperature controlled reaction I am going to investigate the effect that water temperature has on the diffusion of anthocyanin through the cell membrane of a beetroot. I need to work out the optimum temperature for heating the beetroot so that the membrane does not break down and contaminate other parts of the salad. If the solution has a high concentration of anthocyanin it will be dark red and less light will pass through, this will be measured using a colorimeter. Temperature will be the independent variable, and the amount of red dye will be the dependent variable. I will conduct the experiment by increasing the temperature of the water surrounding the beetroot discs; I will use a range of different temperatures (20�C, 40�C, 60�C, 80�C and 100�C). In order to reach these temperatures I will use water baths that will be set up in the laboratory. However, the experiment being conducted at 20�C will take place at room temperature and at 100�C the beetroot will be heated in a beaker of boiling water on a tripod under a Bunsen burner. I plan to repeat the experiment three times in order to make sure that the readings are precise and reliable. The results will then be averaged so a graph can be plotted and accurate conclusions can be made. ...read more.

As above, the thermometer detects the temperature, the beetroot is added and the stop clock is timed for five minutes. * The results will be recorded in a table. * The experiment will continue until I have results for the range of water temperatures and an average will be taken. Before conducting the official practical assessment I carried out preliminary experiments to determine whether the initial measurements would provide precise and accurate results for analysis and thus achieve a beneficial conclusion. I investigated different volumes of water and varied the number of discs I used. I found that 10ml of water gave a volume suitable enough to allow sufficient diffusion of anthocyanin molecules but prohibit too much dilution of the intensity of the pigment concentration. The number of discs added to the water remained the same, yet the thickness was changed from 3mm to 5mm, as cutting was easier, increasing the likelihood of them being equal size. My prediction is that as the temperature increases so will the rate of reaction, thus releasing more dye. This is due to the kinetic theory which states as temperature increases, the kinetic energy of the substrate and enzyme molecules increases and so they move around faster and collide more often increasing the rate of reaction. However when the enzyme reaches its optimum temperature the rate of reaction will plateau as the membrane proteins are denatured. Results: - The table shows the percentage of light passing though the solution at different temperatures in all three experiments, and average has also been taken. ...read more.

This would have caused excess red pigment on the beetroot. I also didn't wash excess pigment off each disc and I cannot assess the amount of pigment that was left on each disc. The excess pigment can easily get into the water in the boiling tube and as a result cause a higher reading on the colorimeter. Devising a method to reduce the amount of excess pigment produced would make results more accurate and reliable. Also another reason for the anomalies could be the fact that the beetroot pieces were cut out of different parts of the beetroot. This could mean that different parts of the beetroot could have more red pigment than others, resulting in those beetroot discs with more red pigment diffusing out more red pigment when heated. Making sure each beetroot disc was cut out of the same place in the beetroot would cause all of the beetroot discs to hopefully contain the same amount of red pigment to start off with. If I were starting the experiment again I would conduct it on the same day so the beetroot would stay moist. I would also leave the beetroot discs in the solution for longer to allow a chance for further diffusion. If I were extend my investigation I would add a pH buffer, as this accompanies temperature in making the enzymes work at their optimum. I would also use a smaller range of temperatures, starting with 10 to about 50, as my results don't show a gradual break down of the membrane, it is more rapid. ...read more.