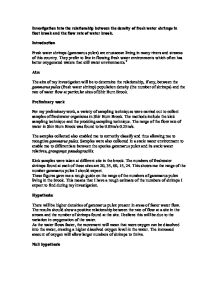 Investigation into the relationship between the density of fresh water shrimps in fleet brook and the flow rate of water brook.

Investigation into the relationship between the density of fresh water shrimps in fleet brook and the flow rate of water brook. Introduction Fresh water shrimps (gammarus pulex) are crustacean living in many rivers and streams of this country. They prefer to live in flowing fresh water environments which often has better oxygenated waters that still water environments.2 Aim The aim of my investigation will be to determine the relationship, if any, between the gammarus pulex (fresh water shrimp) population density (the number of shrimps) and the rate of water flow at particular sites of Shir Burn Brook. Preliminary work For my preliminary work, a variety of sampling techniques were carried out to collect samples of freshwater organisms in Shir Burn Brook. The methods include the kick sampling technique and the prodding sampling technique. The range of the flow rate of water in Shir Burn Brook was found to be 0.05m/s-0.25m/s. The samples collected also enabled me to correctly classify and thus allowing me to recognize gammarus pulex. Samples were also collected in a static water environment to enable me to differentiate between the species gammarus pulex and its static water relatives, grangonyx pseudogracilis. Kick samples were taken at different site in the brook. The numbers of freshwater shrimps found at each of these sites are 20, 35, 60, 15, 24. This shows me the range of the number gammarus pulex I should expect. These figures gave me a rough guide on the range of the numbers of gammarus pulex living in the brook. This means that I have a rough estimate of the numbers of shrimps I expect to find during my investigation. Hypothesis: There will be higher densities of gammarus pulex present in areas of faster water flow. The results should show a positive relationship between the rate of flow at a site in the stream and the number of shrimps found at the site. ...read more.

Under these circumstances, another technique is used. In this technique, 5cm3 of water sample is used and a series of two reagents are added to it. The colour change underwent is compared to the colour changes on a chart. This gives the phosphate concentration to �0.25mg/l accuracy. The reasons are similar to those for testing the nitrate concentrations of water. The phosphate low concentration test will present a range of five distinctive colour changes. These will correspond to the concentrations of 0.0mg/l, 0.5mg/l, 1.0mg/l, 1.5mg/l, 2.0mg/l, and 2.5mg/l. This give the phosphate level to a greater degree of accuracy the reflectometers for higher concentrations of phosphates, although the over all precision error will remain similar (0.5�2.5 = 1.0 � 5.0) To measure the depth of brook at different sites. Meter rule Meter rule The meter rule will be most suitable as only a rough guide for the depth of the brook is to be obtained. The waster will leave a mark on the ruler from which the depth can be taken. The meter rule will give the depth of the brook to �1mm. This is of an acceptable accuracy as only a rough guide of the depth of the stream at the sampling site is requires. To collect sample kicked up. 0.50 meter net width. 0.25 meter net width. 0.5mm holes. 1mm holes. 0.50m wide net with 1mm holes in the netting material with 2m handle. As kick sampling is preferred, as net of the biggest width should be used to ensure that all organisms disturbed by the kick sampling is collected. As gammarus pulex are larger than 1mm, the pores in the net will allow substrate to filter through while retaining the gammarus to be sampled. The biggest possible net is used to ensure that most of the sample kicked up from the stream bed is collected. A net with 1mm pores is used to allow mud particles to pass through the net. ...read more.

* Other investigations taking place upstream * There were other people conducting investigations up stream. This means that the samples I collect could contain some shrimps that have been disturbed and the carried down the stream by the current. This will increased the number of shrimps I collect in some samples. * Errors in classifying species of shrimp * Precision errors of apparatus > Meter Rule �0.5mm > Flow meter �0.01m/s > Oxygen meter � 1.5% of total scale of 0.0 - 19.9mg/l > Reflectometer �0.5mg/l > Digital thermometer �0.3 > Digital pH meter �0.2 These contribute to the percentage errors of the results. Anomalous results Anomalous results are highlighted in red in the result table. These are excluded when the average for each site is calculated. This is so that it will affect the reliability of the data. The anomalies would probably have arisen due to the limitations to the method listed above. Improvements * Sample a larger number of sites to further establish a trend. * Sample different rivers to see if the trend is replicated. * Find regions in the stream where the water current is faster to see if the trend continues linearly, or whether there is a cut off point to this positive correlation. * Retest sites which seem to give anomalous results. * Investigate the contribution of substrate quality to shrimp density * Reflectometers could have been contaminated with water samples of other groups. Since the equipment is shared, other groups using the reflectometer to test water samples would have their water left in the testing slot. This will results in the indictor strip changing its colour to another shade thus registering an anomalous NO3 reading. Further work Futher work should be conducted to investigate the relationship between the substrate quality of different sites of the stream and the number of gammarus pulex these sites contain. * Investigate whether the diversity of fresh water fauna is linked with the speed of the water flowing at the point. This will show whether interspecies competition has a major effect on the population density gammarus pulex. ...read more.