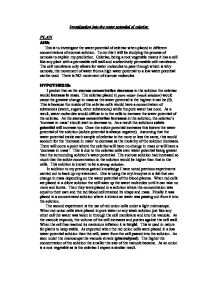 Investigation into the water potential of celeriac.

* The celeriac being quite a large vegetable can be hard to handle so when using the cork borer I should hold this securely. FAIR TEST - VARIABLES * Volume of sucrose solution should be constant in both tests. This allows for both tests to be valid. * The length & diameter of celeriac cylinders must be kept constant. To ensure this the same cork borer should be used. The lengths should not range more than 0.1 of a cm from 2. The increased length means there is more surface area. One of the factors that diffusion depends on is the surface area and if this is increased this can increase the rate of diffusion. * All test tubes should be left in the solution for the same time. This needs to be controlled as near as possible by placing the all celeriac as soon as the first one has been placed. They should be removed in the same order. * It is highly likely to be quite a range of mass of the cylinders. This is why it is essential that the 'mass of change' is to be recorded to get a valuable result. However I must take care to record the correct weight after with the corresponding weight before. ...read more.

4. When making up the solutions there were times I had to use more than 30ml of sucrose or water. Therefore when drew up 30ml and then an extra 10ml it could have been possible some residue of water or sucrose could have been left. The solutions were then not made as accurately as intended. To improve this experiment I will certainly need to take more readings for each concentration. For example the average percentage chamnge in mass was greater for 0.4 M than it was for 0.5 M, which does not tie in. I should decide to blot each cylinder for exact equal times as I suspect this greatly disrupted the results. I have obtained outside data to form a graph of the water potential of various sucrose solutions. When I look at my graph I see that at 0.33M there was no change in mass as the point crosses the x-axis. On the line of best fit this shows as 0.35M. The potential must be somewhere between 0.3M and 0.4M. I can therefore suggest that as there is a range, the celeriac's water potential must be between -850kPa to -1075kPa. My experiment was not accurate enough to show an exact number which is why a range has been provided. By increasing the number of results would increase the accuracy of the water potential. ...read more.