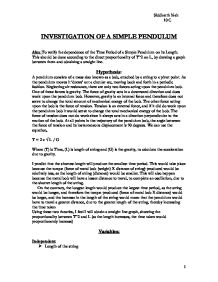 investigation of a simple pendulum

INVESTIGATION OF A SIMPLE PENDULUM

Aim: To verify the dependence of the Time Period of a Simple Pendulum on its Length. This should be done according to the direct proportionality of T^2 on L, by drawing a graph between them and obtaining a straight line.

th oscillation might not have been the same.The hold on the thread could have differed (the thread might have been put differently into the cork, making the hold different)Wind in the room could have affected the time taken to complete 10 oscillations.Even though the stand was held in place to avoid it shaking, lack of concentration, or a slack grip could have resulted in the stand shaking.

While doing the experiment, we saw other people swinging their pendulum from a certain angle, with the use of the protractor, for all their tests. As we knew that the angle would not make a difference to the time period, so we had not used a protractor for our tests, we verified our knowledge, by doing a few tests, and these were the results:

(The length of the string was kept as 20cm)

Each oscillation took 0.9seconds. The millisecond has not been included, as that could be different due to human reaction time not being the same in all cases. These results merely show that you do not need to swing the pendulum from the same angle, as a constant, in order to derive accurate results. Therefore, not using the same angle for all the tests could not have been an error, on our part.

Note:  implementing the points shown to make it a ‘fair’ test reduced the margin of error.

The student has answered the question of how the time period of a pendulum is dependent on length very well. They have started off with their hypothesis and explaining why they believe this to be what will occur, using their ...

The student has answered the question of how the time period of a pendulum is dependent on length very well. They have started off with their hypothesis and explaining why they believe this to be what will occur, using their theory to back it up. I would always recommend backing up whatever you claim with theory, as this is generally where the marks come from. He has made a table and graph that back up his prediction very well.

I would recommend using SI units, meters instead of cm, but in this case it is not very important. Just be careful if you don't use SI units, as you could go wrong with some equations if you do not use SI units. He also should have plotted a line of best fit rather than joining dot to dot, you will always lose marks if you plot dot to dot. He could have then used his gradient to calculate g using his equation to figure out how. This would help add some more depth to his coursework.