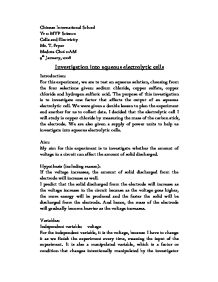 Investigation of aqueous electrolytic cells.For this experiment, we are to test an aqueous solution, choosing from the four selections given: sodium chloride, copper sulfate, copper chloride and hydrogen sulfuric acid.

For this experiment, we are to test an aqueous solution, choosing from the four selections given: sodium chloride, copper sulfate, copper chloride and hydrogen sulfuric acid. The purpose of this investigation is to investigate one factor that affects the output of an aqueous electrolytic cell. We were given a double lesson to plan the experiment and another for us to collect data. I decided that the electrolytic cell I will study is copper chloride by measuring the mass of the carbon stick, the electrode. We are also given a supply of power units to help us investigate into aqueous electrolytic cells.

My aim for this experiment is to investigate whether the amount of voltage in a circuit can affect the amount of solid discharged.

If the voltage increases, the amount of solid discharged from the electrode will increase as well.

For the independent variable, it is the voltage, because I have to change it as we finish the experiment every time, meaning the input of the experiment. It is also a manipulated variable, which is a factor or condition that changes intentionally manipulated by the investigator to observe the effect. Since we want a big difference of mass change, we decided to go from 2amps to 12amps.

For the dependent variable, it is the mass of electrode, because this is what I will be measuring, meaning the output of this experiment. It is also the responding variable; the variable that may change result of the independent variable.

These are all the controlled variables, because they all need a certain amount or distance in order to keep the experiment constant each time I do it and to make it a fair test.

(Refer to the graph)

Referring to my graph, the line of best fit shows clearly a trend that the mass of the electrode increases as the voltage increase, therefore supporting my hypothesis, proving that the prediction was correct. As the voltage increased, the faster the solid was discharged from the electrode, causing the mass to increase gradually. However, during the process of collecting the data, there was a problem of unstable temperature. I had to redo the experiment again as the first attempt was not what I expect, the temperature went from 20.5ºCto43 ºC. Therefore, I changed the solution after every read of each different voltages in order to keep a more stable temperature and hold a fair test. I also noticed the copper chloride in the first attempt changed from turquoise color to dark green, I believe it is the carbon residue left in the solution. The second time, there was less because we changed to a new solution every reading. Excluding the errors made during the experiment, all in all base on the points stated above, it proves that my hypothesis is correct.

As mentioned in the discussion, due to the unexpected rapid increase of temperature as the voltage increase, I decided that the solution should be changed every reading to prevent an unfair test, producing unreliable results. Changing the solution after every reading will decrease the risk of unstable temperature and will carry out a fairer test, and the results are more accurate.

My method was overall satisfactory as it carried out a successful experiment, proving my hypothesis right. But if I were to do this investigation again, I would decrease the voltage range as the range I did was too high; hence, producing chlorine gas which was toxic and it was too strong when the power unit reached 12amps. After this experience, I would be aware of the voltage, and next time I would only start from 1amps and end at 5amps. That way, there will be less risk of breathing in too much toxic chlorine gas and the experiment would be safer as well. This investigation can be extended to investigate on whether the aqueous solution would be affect by the length of the electrode.