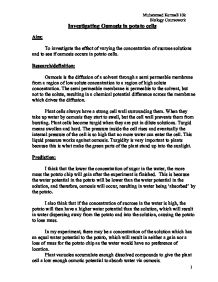 To investigate the effect of varying the concentration of sucrose solutions and to see if osmosis occurs in potato cells.

Plant cells always have a strong cell wall surrounding them. When they take up water by osmosis they start to swell, but the cell wall prevents them from bursting. Plant cells become turgid when they are put in dilute solutions. Turgid means swollen and hard. The pressure inside the cell rises and eventually the internal pressure of the cell is so high that no more water can enter the cell. This liquid pressure works against osmosis. Turgidity is very important to plants because this is what make the green parts of the plant stand up into the sunlight.

I also think that if the concentration of sucrose in the water is high, the potato will then have a higher water potential than the solution, which will result in water dispersing away from the potato and into the solution, causing the potato to lose mass.

In my experiment, there may be a concentration of the solution which has an equal water potential to the potato, which will result in neither a gain nor a loss of mass for the potato chip as the water would have no preference of location.

A range of sucrose solutions will be prepared with concentrations 0.2 molar, 0.4 molar, 0.6 molar, 0.8 molar and 1 molar. This will be done by adding varying amounts of distilled water to varying amounts of sugar solution. Sections of potato will be cut using a scalpel and will be measured using a ruler. The chips should also be weighed and dried before the experiment begins. This part of the preparation must be done very accurately as a change in the surface area may allow more or less osmosis to occur. The weight and length are being measured in this investigation. The mass of each chip will be measured before and after so that more results can be obtained and to see if osmosis has occurred. Five potato chips will be placed in each of the five test tubes. They would be labeled so you know which test tube is what solution and how much. The potato pieces will then be placed in specific test tubes and left for 5 minutes with the mixture in their. Then the potato pieces will be removed and dried using paper towels and then re-weighed. I will repeat this experiment 3 times. This will hopefully produce accurate results and an accurate conclusion and graph.

To create a fair test, certain aspects of the experiment will have to be kept the same whilst one key variable is changed. I have chosen to vary the concentration of the sugar solution. This will give me a varied set of results from which I hope to make a decent conclusion. If any of the non-variables below are not kept constant it would mean it would not be a fair test. For instance if one of the potato chips was 1cm longer the surface area of the chip would be larger and there would therefore be more space for osmosis to occur. Doing all the tests at one temperature will make it fair.

To carry out this experiment I have to make sure that:

The volume of the solution that the potato chips are kept in must be fair. The must be totally covered in the solution.

During this investigation, there are a number of safety factors which you have to take into consideration:

Before the actual experiment, I did a preliminary test so I have a fair idea of what changes I need to make. I also did this as a practice run so I could do my actual investigation quickly and accurately.

These preliminary results give me an overall impression on the change in mass gain or loss when placed in varying concentrations of sucrose solution. However in my actual experiment and in my final method I will keep the chips in the mixture for eight minutes instead of five minutes to get more accurate readings and to let osmosis to occur longer.

Final method and changes made:

For this investigation, I am doing 5 concentrations.

The graph shown gives the line of best fit for the average change in mass of the potato chips over the course of the eight minute experiment. The graph has a line that crosses from mass gain to mass loss. You can see the line intercepts with the x axis labeled the concentration. That is called equilibrium. This means that the interception point has neither gained nor lost weight. There is a pattern on my graph, and this is, as the concentration of the solution increases, the average change in mass decreases. My prediction was correct. I said that the lower the concentration of sugar in the water, the more mass the potato chip will gain after the experiment is finished. I can prove this because its in my results table showing average change in mass. The graph is evidence to backup my prediction showing it was correct.

From the point 0.5 there appeared to be no further water loss, suggesting that the cell is fully plasmolysed. This graph of the change in mass helps prove the point of complete plasmolysis, whereby the potato cannot expand and take in any more water. This is because the water potential of the sugar solution is higher than that of the potato chip.

The experiment was very successful in my opinion. I obtained a large quantity of very accurate results from which I was able to create informative graphs. I think I took easily enough results for the amount of concentrations that I was using, and the time that I used for the experiment to last was enough to allow sufficient osmosis to occur. However if I was to repeat the experiment I will increase the time of the results to allow more osmosis to happen and possibly find out the saturation point of the chips. The range of concentrations was adequate but I would possibly create more concentrations if I repeated the experiment so that I would have more varied results, i.e. 0.10m, 1.15m, 1.20m, and so on.

The cutting of the potatoes was a difficult part of the experiment, although I was recording my results by mass, it could well have affected the surface area and so the overall rate of osmosis. If I were to repeat the experiment I would have possibly found a machine to cut the potato as it would ensure that all potatoes would be the same weight. As well as the potato I could have found a more accurate way to measure out the solutions and to determine the molar concentrations. This would ensure that I have an accurate amount of fluid in each test tube. I could also weigh each chip on a more accurate scale, e.g. not to 0.00g but to 0.0000g.

If you flick through my graph, then I would say I have a reading which is far away for the line. This anomalous result was 0.80m. This could have been human error faults. When the potato chips were removed from the test tubes and dried I may well have dried some potatoes more thoroughly than others and so some would have more excess water, which would add to the mass. Temperature could have been another factor which could have affected osmosis occurrence. You could extend the investigation by recording the width, height and length before and after the experiment.

However with all this said I think that the experiment was truly successful and I was very pleased with the complete comparison of my results with my initial prediction.