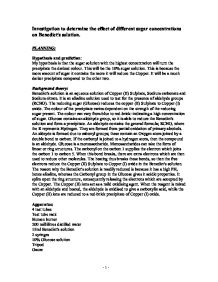 Investigation to determine the effect of different sugar concentrations on Benedict's solution.

Investigation to determine the effect of different sugar concentrations on Benedict's solution. PLANNING: Hypothesis and prediction: My hypothesis is that the sugar solution with the highest concentration will turn the precipitate the darkest colour. This will be the 10% sugar solution. This is because the more amount of sugar it contains the more it will reduce the Copper. It will be a much darker precipitate compared to the other two. Background theory: Benedict's solution is an aqueous solution of Copper (II) Sulphate, Sodium carbonate and Sodium citrate. It is an alkaline solution used to test for the presence of aldehyde groups (RCHO). The reducing sugar (Glucose) reduces the copper (II) Sulphate to Copper (I) oxide. The colour of the precipitate varies dependent on the strength of the reducing sugar present. The colour can vary from blue to red-brick: indicating a high concentration of sugar. Glucose contains an aldehyde group, so it is able to reduce the Benedict's solution and form a precipitate. An aldehyde contains the general formula; RCHO, where the R represents Hydrogen. They are formed from partial oxidation of primary alcohols. An aldeyde is formed due to cabonyl groups; these contain an Oxygen atom joined by a double bond to carbon. If the carbonyl is joined to a hydrogen atom, then the compound is an aldehyde. Glucose is a monosaccharide. ...read more.

The third test tube now contains 0.1% sugar solution. 5- The fourth test tube should contain 10 millilitres of distilled water because it is a control. 5- Place all test tubes (except the control) on the test tube rack and add 5millilitres of Benedict's solution to each test tube. 6- Add 300ml of tap water to the beaker and place on top of the gauze, which will be placed on the tripod. 8- Goggles should be worn at this point. 9- Bunsen burner should be underneath the tripod and turned on. Put it on a high flame. 10- Water should start to boil, measure with thermometer, so that it is 90oC and leave. 11- Using the test tube holder, place all three test tubes one by one in the boiling water bath and time it for four minutes using the stopwatch. 12- After four minutes, using the same test tube holder, take out the test tubes and place them on the test tube racks. 13- Carefully look at test tubes and record results. Results Test tube Solution (%) Colour of precipitate 1 10 Copper-red 2 1.0 Red 3 0.1 Orange-red 4 Control Clear Results 2: Test tube Solution (%) Colour of precipitate 1 10 Dark red 2 1.0 Orange 3 0.1 Dark yellow 4 Control Clear Analysis It is clear to see from the results that as the concentration of the sugar increases, the colour of the precipitate becomes more intense. ...read more.

This would be best measured using transmittance, which would only be possible whilst using a colorimeter. Changes were also made to the preliminary method, this some apparatus chosen were not suitable. The fist change made was the size of the beaker, this is because the beaker was to large to fit the tripod, therefore a smaller beaker had to be used. Also, I decided to add a control (as discussed earlier). Further research If I was conducting the experiment again the fundamental change regarding the experiment would be to add a colorimeter. This would enable me to measure the transmittance of the sugar molecules, as opposed to the colour intensity. Transmittance is the amount of light absorbed, therefore the sugar molecule that absorbs the highest amount of light will have higher transmittance. The following method would be used to carry out this experiment: Set up the colorimeter by following the instructions below: 1- Connect the colorimeter to a power socket. 2- Turn it on. 3- Set the device at 0% firstly and then at red. 4- Open the device up and insert the sugar solution. 5- Click on start and it should begin to record he data. The transmittance will be recorded as numbers, for example 450nm. Beer's Law can be used to define the concentration of the unknown solution. This is the absorption coefficient for light passing through a solution. It is expressed as I=Io10-cx, where C is the concentration, whilst x is the thickness. - 1 - ...read more.