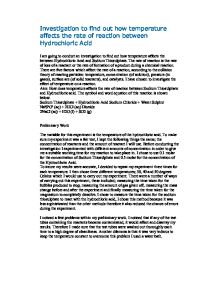 The variable for this experiment is the temperature of the hydrochloric acid. To make sure my experiment was a fair test, I kept the following things the same; the concentration of reactants and the amount of reactant I will use. Before conducting the investigation I experimented with different amounts of concentration in order to give me a suitable working time for my reaction to take place in. I chose to use 0.1 molar for the concentration of Sodium Thiosulphate and 0.5 molar for the concentration of the Hydrochloric Acid.
To insure my results were accurate, I decided to repeat my experiment three times for each temperature. I then chose three different temperatures; 30, 40 and 50 degrees Celsius which I would use to carry out my experiment. There were a number of ways of carrying out this experiment, these included; measuring the time taken for the bubbles produced to stop, measuring the amount of gas given off, measuring the mass change before and after the experiment and finally measuring the time taken for the magnesium to completely dissolve. I chose to measure the time taken for the sodium thiosulphate to react with the hydrochloric acid, I chose this method because it was less sophisticated than the other methods therefore it also reduced the chance of errors during the experiment.

I noticed a few problems within my preliminary work. I noticed that if any of the test tubes containing the reactants became contaminated, it would affect and disarray my results. Therefore I made sure that the test tubes were washed out thoroughly each time to a high degree of cleanliness. Another dilemma is that it was very tedious to keep the temperature constant to overcome this problem I used a water bath.

Repeat results and averages will be taken to improve the credibility of the findings, and present solid grounding for the final conclusion. The repeat results will help to iron out any anomalies and the average will give a good summary of the results of the experiment. However if one set of results is entirely different to the other, a third experiment will be performed to replace the anomalous set of results.

A pair of goggles will be worn during the heating part of the experiment in order to protect the eyes. An apron will also be worn to protect the skin and clothing. When handling hot beakers and measuring cylinders a pair of tongs will be used. A gauze and heatproof mat will be used while heating to avoid any damage to the equipment.

In order for my findings to be valid the experiment must be a fair one. I will use the same standard each time for judging when the X has disappeared. I will make sure that the measuring cylinders for the HCl and thiosulphate will not be mixed up. The amount of HCl will be 5 cm3 each time, and the amount of thiosulphate will be fixed at 15 cm3. During the heating stage of the experiment, a blue flame will be used throughout. Also the same Bunsen burner and gas tap will be used to maintain continuity. All of these precautions will make my final results more reliable and keep anomalies at a minimum so thus make the entire investigation more successful.

I predict that as the temperature is increased the rate of reaction will increase. The reaction will increase 100% each time this is because my teacher told me so. This means that the graph drawn up in my analysis will have positive correlation, and will probably be curved as the increase in rate of reaction will not be exactly the same as the temperature is increased. This can be justified and explained by relating to the collision Accelerated diet plan that helps you lose weight and info that explodes many dieting myths that are widely thought of as being true!

For a reaction to occur particles have to collide with each other, however only a small percent of these particles result in a reaction. This is due to the “energy barrier” to overcome. Only particles with enough energy to overcome this barrier will react after colliding. The minimum energy that a particle must have to overcome the barrier is called the “activation energy”, or “Ea”. The size of this activation energy is different for different reactions. If the frequency of collisions is increased the rate of reaction will increase. However the percent of successful collisions remains the same. An increase in the frequency of collisions can be achieved by increasing the concentration, pressure, or surface area.
Concentration – If the concentration of a solution is increased there are more reactant particles per unit volume. This increases the probability of reactant particles colliding with each other.
Pressure - If the pressure is increased the particles in the gas are pushed closer. This increases the concentration and thus the rate of reaction.
Surface Area – If a solid is powdered then there is a greater surface area available for a reaction, compared to the same mass of unpowdered solid. Only particles on the surface of the solid will be able to undergo collisions with the particles in a solution or gas. The particles in a gas undergo random collisions in which energy is transferred between the colliding particles. As a result there will be particles with differentiating energies. Maxwell-Boltzmann energy distribution curves show the distribution of the energies of the particles in a gas.

These curves can be explained tin the following points:

1) There are no particles with zero energy.
2) The curve does not touch the x-axis at the higher end, because there will always be some particles with very high energies.
3) The area under the curve is equal to the total number of particles in the system.
4) The peak of the curve indicates the most probable energy

My experiment was very successful and accurate as looking at my results I can see that on all the three attempts of each of the different concentrations the time taken on each are more or less the same and are only out by no more than 4 seconds of each other and also there are no anomalies. My graph, along with the line of best fit shows me that there is positive correlation between the rate of reaction and the temperature. This therefore supports my prediction that as the temperature increased, so did the rate of reaction. This is because when the temperature is increased the particles will have more energy and thus move faster. Therefore they will collide more often and with more energy. Particles with more energy are more likely to overcome the activation energy barrier to reaction and thus react successfully. The graph plotting time against the rate of reaction x1000 shows that the difference of rate between increasing temperatures was pretty much regular, increasing in steps of 10-13 (7.6 to 17.4 to 30.0 to 38.0). However, there is a giant gap in the last temperature increase – at 51.5ºC the rate of reaction x1000 is 38.0, and at 62.5ºC it is 62.5.
For this all due to the collision theory (in brief):
For a reaction to occur particles have to collide with each other. Only a small percent result in a reaction. This is due to the energy barrier to overcome. Only particles with enough energy to overcome the barrier will react after colliding. The minimum energy that a particle must have to overcome the barrier is called the activation energy, or Ea. The size of this activation energy is different for different reactions. If the frequency of collisions is increased the rate of reaction will increase. However the percent of successful collisions remains the same. An increase in the frequency of collisions can be achieved by increasing the concentration, pressure, or surface area.

To conclude, I feel that my investigation was very successful overall, as my results from the experiment clearly backed up and supported my prediction. I particularly valued the way in which I co-coordinated the way in which I chose the concentration was going to use before attempting the experiment. By doing this it made the investigation run smoothly, as I knew I wouldn’t come across any further problems with my equipment or investigation. The preliminary work enabled me to find out about how concentration of solution can have affect with reacting with a chosen substance (e.g. magnesium) this in turn made my results fair and accurate. I was really happy with my results, as they contained no anomalies, which were backed up by my graph. I also think that the repeats of my experiments made the investigation to have a good suitable degree of accuracy. If I were to do this experiment I would use a different solution and vary the concentration used and compares results to this experiment to see if there were any discrepancies in the results. To conclude I think the investigation was a successful one as I was able to answer and explain my aim both with knowledge and physical evidence