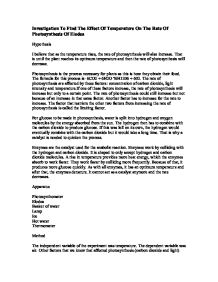 Investigation To Find The Effect Of Temperature On The Rate Of Photosynthesis Of Elodea.

Repetitions would, however, improve the overall reliability of the results. There are quite a few factors that could affect the results of my experiment. Some of these are variables that were mentioned earlier and could not be controlled, or they were variables that were not initially considered. While performing the experiment, some of the oxygen produced from photosynthesis may have dissolved into the water. Some oxygen may have even been used by micro-organisms living on the pond weed. The amount of oxygen dissolved or used by microbes is probably insignificant to my results since the degree of accuracy at which I measured was not high enough. Some oxygen is also used during the respiration of the plant. But since only bubbles were counted, the volume of bubbles was not as important. But to volume of oxygen produced is important, since it was volume in terms of bubbles that were measured. As the rate of photosynthesis decreased due to a decrease in light intensity, the size of the bubbles produced also became smaller. This change in bubble size was no accounted for when the results were analyzed. For a more accurate analysis of the collected data, volume should have been measured instead of bubble quantity since the size of bubbles can vary. Using a capillary tube in place of the test tube so that the volume of each bubble could have been measured could have done this. During the high intensities I had experienced counting difficulties of the bubbles being produced. There are also factors affecting accuracy at low light intensities. With low light intensity, the pond weed receives some light energy from background light such as sunlight seeping through curtains or the light from the lamp of another student's experiment. To eliminate most all background light, the experiment must be performed in a completely dark room. Even then, some of the light from the lamp in my experiment would reflect of the table and reach the plant though this amount of light is probably insignificant in affecting the rate of photosynthesis. ...read more.

Bpm graph, there is a simple way to explain this; Elodea is a living organism, and no living organism follows a regimented pattern. Thus we can say that this anomaly is due to the specimen being not entirely infallible. As I predicted, the rate of photosynthesis increased constantly unto the LSP because all limiting factors, other than light, were kept consistently the same. Thus these results support my prediction. evaluation I feel that this experiment has been successful in fulfilling the objective. The planned procedure worked fairly well, needing only a few minor adjustments to obtain good results. The evidence obtained supports photosynthetic theory and my prediction; it appears to be sound. As mentioned before, the only (slightly) anomalous result is simple to explain; Elodea, being a living organism will not produce uniform results - thus the anomaly, it can be said, is due to the fallibility of the specimen. No problems were encountered; the only circumstance which would have been a difficulty would have been controlling the temperature. However, this was eliminated by putting the boiling tube into a water bath which absorbed the majority of the heat energy from the lamp, and by keeping the specimen far away enough from the lamp for there to be no significant change in temperature. This experiment is rather crude, and the method of measuring the rate of photosynthesis especially; counting the number of bubble of CO2 produced in a minute is not very accurate - measuring a volume would be far more precise, but the time for a reasonable amount of CO2 to be produced would be rather long, I feel; this would be inappropriate I believe, where time is limited. Further work could be carried out, investigating the effects of the quality of light on the rate of photosynthesis; different coloured light for example could be used. This could be of commercial benefit, as finding out the effect of the colour of light on the rate of photosynthesis could aid plant growers to find out which type(s) of light make(s) plants grow quickest. ...read more.