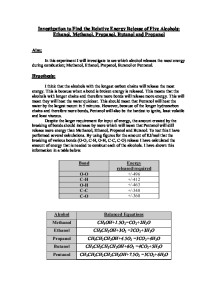 Investigation to Find the Relative Energy

Investigation to Find the Relative Energy Release of Five Alcohols: Ethanol, Methanol, Propanol, Butanol and Propanol Aim: In this experiment I will investigate to see which alcohol releases the most energy during combustion; Methanol, Ethanol, Propanol, Butanol or Pentanol. Hypothesis: I think that the alcohols with the longest carbon chains will release the most energy. This is because when a bond is broken energy is released. This means that the alcohols with longer chains and therefore more bonds will release more energy. This will mean they will heat the water quickest. This should mean that Pentanol will heat the water by the largest mount in 5 minutes. However, because of the longer hydrocarbon chains and therefore more bonds, Pentanol will also be the hardest to ignite, least volatile and least viscous. Despite the larger requirement for input of energy, the amount created by the breaking of bonds should increase by more which will mean that Pentanol will still release more energy than Methanol, Ethanol, Propanol and Butanol. To test this I have performed several calculations. By using figures for the amount of KJ/mol that the breaking of various bonds (O-O, C-H, O-H, C-C, C-O) release I have calculated the amount of energy that is needed to combust each of the alcohols. I have shown this information in a table below. ...read more.

That is why I will only be taking the energy released figure I calculate as a comparison to my hypothesis, and the temperature change will just show the efficiency of the alcohol to heat water. Preliminary Conclusion: After completing my preliminary investigation I have decided on all of my variables. I will use 100cm3 of water for the experiment, as this is not too little to prevent evaporation and it is not too much to mean that the water will be difficult to heat. I Have decided to have the tin 15cm away from the wick. This will mean that the heat can reach the tin, but it is not too close so that it becomes dangerous. I will use a tin that I have chosen at random from all of the tins that I will retain for every single one of my experiment repeats. I have decided to repeat the experiment a total of five times for each alcohol, and then use the data that I gather from these five attempts to work out an average which I will then use for all of my future calculations. Method: For my experiment to be 100% successful I must follow a strict method. Firstly, I will make sure that I have accurately measured 100ml of water in a measuring cylinder. ...read more.

Evaluation: My results are not the best most conclusive set of results, and are far below my expectations of this experiment. There were many circumstances beyond our control that effected the experiment. Therefore, the evidence that we produce is not entirely accurate, however we did manage to get a full set of results so the experiment did go quite well. However, as I mentioned before there were a number of factors that we could not control that could have, and probably did, effect our results and the way our experiment went. Firstly, the spirit burners had varying amounts of alcohol in them. This could have effected the amount of alcohol that was getting to the tip of the wick to be burnt. Also, the wicks were made of many different materials. Although the wick itself does not burn the different materials may have soaked up more of the alcohols allowing them to burn easier. However, I do think that the method that we developed was the best way that we could have done the experiment. The overall method was very successful and allowed us to complete the experiment efficiently. However, I would quite like to repeat the experiment. I would definitely try to change the method so that the experiment is in a more controlled environment. This would prevent several factors, such as the wind, from effecting or results as they did in this experiment. Overall the experiment was relatively successful and provided us with a fairly useless, but interesting, set of results. ...read more.