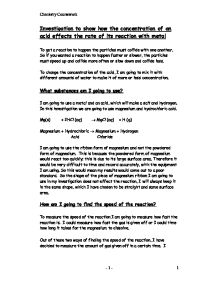 Investigation to show how the concentration of an acid effects the rate of its reaction with metal.

Investigation to show how the concentration of an acid effects the rate of its reaction with metal To get a reaction to happen the particles must collide with one another. So if you wanted a reaction to happen faster or slower, the particles must speed up and collide more often or slow down and collide less. To change the concentration of the acid, I am going to mix it with different amounts of water to make it of more or less concentration. What substances am I going to use? I am going to use a metal and an acid, which will make a salt and hydrogen. In this investigation we are going to use magnesium and hydrochloric acid. Mg(s) ? 2HCl (aq) ? MgCl (aq) ? H (g) Magnesium ? Hydrochloric ? Magnesium ? Hydrogen Acid Chloride I am going to use the ribbon form of magnesium and not the powdered form of magnesium. This is because the powdered form of magnesium would react too quickly; this is due to its large surface area. Therefore it would be very difficult to time and record accurately, with the equipment I am using. So this would mean my results would come out to a poor standard. So the shape of the piece of magnesium ribbon I am going to use in my investigation does not effect the reaction, I will always keep it in the same shape, which I have chosen to be straight and same surface area. ...read more.

Here are the results for the 1 molar acid I used in preliminary work are shown in the table below: Preliminary tests - 40cm� acid/10cm� water and 0.10g magnesium Time (seconds) Volume of gas (cm�) O 0 10 20 20 33 30 45 40 57 50 70 60 80 70 86 80 87 90 87 100 87 From the set of results in the table above, we can see that the choice of 1 molar acid was a good choice as the amount of gas released is given off over a sensible amount of time. And it doesn't go past 100cm�, which means I used the right amount of magnesium and acid/water so the gas produced was enough to move the syringe without going past 100cm�. The amount of magnesium I used was 0.10g; this was because it is an easy amount to weigh. Now I know what measurements and masses I will use in my experiment. The amount I have chosen has been carefully considered, because if I had too much magnesium and not enough water the reaction would be to fast, and would not give us enough time to record our results. But if we had too much water and not enough magnesium, the reaction would be to slow and might not fill the gas syringe enough. Also if I do not have enough time, I can do repeats of this experiment which might help improve the accuracy of this experiment. ...read more.

The range of results seems fair and covers a good range as they spread evenly between the graph axes. But as the gap between 20ml and 30ml of acid and 30ml and 40ml of acid is quiet large, I think next time I might be able to go in between the results. This could be done by going up in fives instead of tens. But none below 10ml of acid, as the reaction would be too slow to be accurate enough. Also no higher than 50ml of acid, as the reaction might be too fast to record the results. I would also next time do repeats as this could help my experiment to be more accurate and would make sure I had the right results. Also in my results, I had an anomaly which might not have been there if I repeated the experiment and noticed the mistake, which I could have then changed. I feel repeating the experiment five times would be a good idea, even if it took up a lot of time. Because I would know my results were totally correct and I would not have any anomalies. If I had included more concentrations, I could have got more points on the 'rate' graph, which would show the shape more clearly. It might be better to put points between more experimental ones not extend the range, as they would give very fast or slow readings which are not easy to measure accurately. Chemistry Coursework 1 - 1 - ...read more.