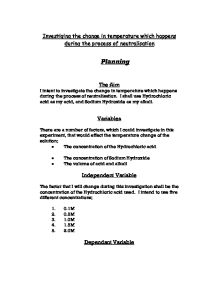 The reducing agent itself is normally oxidised and the oxidising agent is usually reduced. Therefore in the above example, the Hydrochloric acid was the reducing agent and the Magnesium Oxide was the oxidising agent. If a chemical reaction produces heat in the surroundings, it is called an exothermic reaction. If, however, the reaction takes in heat, it is called an endothermic reaction. In these (endothermic) reactions, bonds are broken which takes in energy. In exothermic reactions, new bonds are made which produces energy. When fuel is burnt, bonds have to be broken, which takes in energy. New bonds are then formed, which gives out energy. If more energy is given out than taken in, the resultant reaction is exothermic. Exothermic and endothermic reactions can be shown as energy diagrams. Reaction rates can be measured in a number of ways. The simplest way is to just measure the time that it takes for the reaction to be completed i.e. Reaction Rate =1/Time Taken When we increase the concentration of the reactant particles, the reaction rate increases. If the concentration is increased, it means that there are no more reactant particles in the substance, which are needed for the reaction to successfully occur. ...read more.

Therefore when the concentration of the reactant is increased, the reaction rate increases and therefore there is a greater heat gain. After certain point, the heat change will remain the same. A higher concentration would continue to give the same result, in this case, 8 degrees centigrade I believe that my method was a good and efficient way of carrying out the experiment, it provided me with good convincing results. There was however one renegade result as it was just outside what I believe from my experiment to be the correct curve, the result was for 0.75M acid. This however, could have been because this specific concentration of acid, I had to prepare myself. I still believe however that my results are convincing as they form a clear cut curve, and that is the result of two sets of results which were both taken to minimise error. If I were to repeat the experiment I would look very carefully at the meniscus of the acids and alkalis in order to achieve more accurate measurements. I would also take more time to take care of cleaning beakers and test tubes. Conclusion In conclusion I can say that the concentration of acid is directly proportional to the temperature change of the solution, up to a certain point after which the temperature remains constant. ...read more.